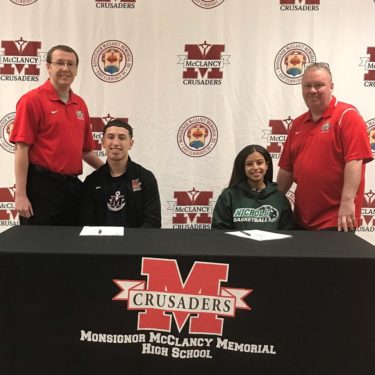 Leandra Ortiz, a senior guard on the Crusaders’ girls’ team, is heading to Nichols College in Massachusetts. A team captain last season and two-time Tablet All-Star, she averaged 11 points, four assists and three steals per game en route to being named to the GCHSAA ‘A’ Division All-League Team.

Jonathan Daniels, a senior guard on the Crusaders’ boys’ team, will be playing this fall at SUNY Maritime, the Bronx. In his final season, Daniels averaged 11.3 points and 4.8 rebounds per game. He was selected to the 2018 Brother Arnold Memorial All-Tournament Team and was a Tablet All-Star last season. 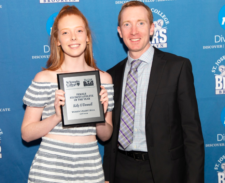 Fresh off being selected to the D3hoops.com All-Region Second Team, the sophomore guard was recently named St. Joseph’s Female Student-Athlete of the Year at the school’s annual awards banquet.

The graduate of St. Edmund Prep H.S., Sheepshead Bay, finished the season tied for the league lead in points scored while averaging 18.5 points per game. With 10.7 rebounds per game, she was one of six players in the league to average a double-double per game.