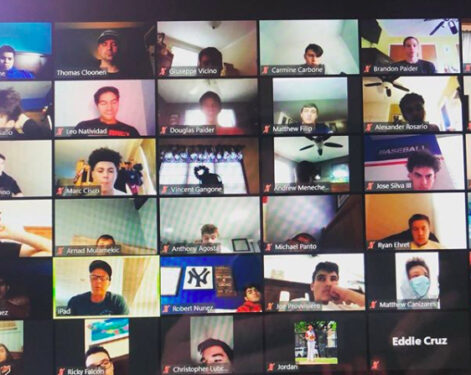 Anthony Iapoce, the hitting coach for the Chicago Cubs and 1991 graduate of Msgr. McClancy H.S., East Elmhurst, held an online Zoom chat for members of the school’s baseball program. He offered baseball insight and advice for the Crusaders stay positive during these uncertain times.

The Catholic High School Hockey League releases its 2019-2020 All-Stars, and the following diocesan players earned the nod on the ‘A’ Division team:

Mort Zachter of Ivins, Utah, is the first to share a memory of the great Gil Hodges. Be sure to send in your remembrances of Gil to jmmanc@gmail.com as we ramp up the energy for the Hall of Fame voting later this year:

I’m the author of “Gil Hodges: A Hall of Fame Life,” which was published by the University of Nebraska Press. This is my favorite Hodges’ story. It shows how great – yet humble – he was.

In 1964, Hodges was the manager of the Washington Senators. They lost 100 games that year. Their roster was largely composed of mediocre players who rarely, if ever, had a moment of glory in which their accomplishments brought them accolades. But on June 8, 1964, a journeyman outfielder named Jim King had the game of his life hitting three home runs.

After the game, the press flocked to King. Photos show him smiling broadly, enjoying his moment in the sun. After a Senators game, the press normally converged upon Hodges. As a former star player, he was the face of the team. But that day, Hodges was an afterthought.

Later, Washington Post reporter Bob Addie saw Hodges crossing the locker room and asked him if he ever hit three home runs in one game. Hodges never broke stride. All he said was, “No, Bob. I’m not in the record books for that one.”

Addie never thought much about Hodges’ comment. Eight years later, after Hodges died of a heart attack, Addie decided to write a final column about him. In his research, Addie learned that fewer than 10 Major League players had ever hit four home runs in one game.

The list included some of the game’s greatest: Lou Gehrig, Willie Mays and the name that brought Addie to the list in the first place, Gil Hodges.

*Hodges’ four-homer game came on Aug. 31, 1950 at Ebbets Field in Crown Heights. He is one of just 18 players in the history of the game to accomplish the feat.