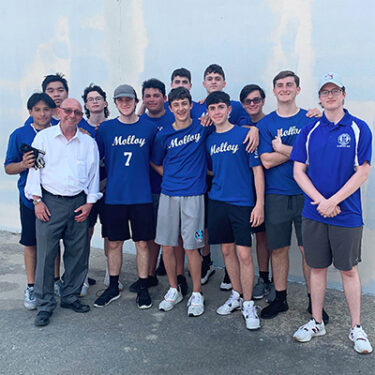 Congratulations to the Archbishop Molloy H.S., Briarwood, varsity handball team on capturing the 2022 CHSAA championship title. The team is coached by Vinny Leonardo.

On Saturday, June 4, the corner of Beach 134 Street and Cronston Avenue on the Rockaway peninsula was renamed in honor of the late Clare Droesch, who was a standout basketball player for St. Francis de Sales, Belle Harbor, and Christ the King H.S., Middle Village. The Rockaway Beach native passed away in May 2018 at the age of 36 after a six-year battle with breast cancer.

At Christ the King, the guard won a national championship during her freshman year and in total was a member of Lady Royals teams that won three straight state titles. Individually, she was a three-time Newsday Player of the Year and was named a high school All-American her senior year.

Murphy was also part of the 4×800-meter relay team that finished in second place at 10:09.80. Her teammates included Camille Munoz, Brianna Rucker, and Eva Gonzales.

Then on June 5 at the Eastern State Championship at Iona Prep, New Rochelle, N.Y., the same relay team won the 4×800-meter relay and broke the Molloy school record in the process. The previous record was set in 2011 at 10:17, and this team shattered that mark with a time of 9:52.