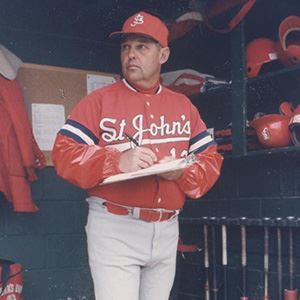 The Hall of Fame coach dedicated nearly 30 years to elevating St. John’s baseball into a national contender. He played shortstop for the Johnnies for four years, including serving as team captain for the 1966 team that reached the College World Series.

When Jack Kaiser became athletic director in 1974, Russo took over the baseball team from his former coach. For 22 seasons, he tallied a 612-310 record – a .664 winning percentage – and guided St. John’s to College World Series appearances in 1978 and 1980.

The two-time Big East Coach of the Year was inducted into the American Baseball Coaches Association Hall of Fame in 1997. While coaching, he also taught social studies, English and physical education at Christ the King H.S., Middle Village.

A Mass of Christian Burial was held May 31 at St. Nicholas of Tolentine, Jamaica.

Layden grew up attending Mass at St. Anselm, Bay Ridge, and playing Catholic Youth Organization basketball and baseball at Our Lady of Angels, Bay Ridge. He then embarked on a long career as a coach at multiple destinations.

He coached his college alma mater Niagara University, for eight seasons, including the team’s first-ever appearance in the NCAA Tournament in 1970. He later served as GM and coached the NBA’s Utah Jazz to the franchise’s first five playoff appearances,1983-1988. He was named NBA Coach of the Year and Executive of the Year in 1984.

Now 87, Layden is enjoying his retirement in Salt Lake City with his wife Barbara of 62 years.

Four members of the St. John’s University, Jamaica, baseball were selected in this year’s MLB draft.

The Colorado Rockies chose junior right-hand pitcher Gavin Hollowell in the sixth round, 189th overall. Hollowell tallied 65 appearances, all in relief, over his three seasons for the Red Storm, going 8-3 with 17 saves and a 2.76 ERA. His 17 saves are tied for fourth most in program history.

The Minnesota Twins drafted junior right-hand hurler Sean Mooney in the 12th round, 359th overall. Mooney ranks fifth on the Johnnies’ all-time lists for wins (21) and strikeouts (249) while placing seventh in career ERA at 2.13 over 244.2 innings.

The Tampa Bay Rays took junior left-hand pitcher Joe LaSorsa in the 18th round, 548th overall. LaSorsa ranked seventh in Division I with a 1.66 ERA and won a team-high six games while striking out twice as many batters as he walked.