Sister Marguerite Torre, the older sister of Baseball Hall of Famer Joe Torre, died at the age of 92. She was an Ursuline Sister of Tildonk for nearly 70 years.

Sister Marguerite grew up in Good Shepherd, Marine Park, and later served as principal of Nativity B.V.M. School, Ozone Park, for 27 years until 2007. She was one of her brother’s biggest fans and thoroughly enjoyed the New York Yankees’ dynasty years of the late 1990s.

When the New York Mets visited Dodger Stadium during a recent road trip, the Los Angeles Dodgers celebrated a legend with ties to both franchises. Ahead of his impending induction into the Baseball Hall of Fame, the great Gil Hodges had his number retired in a pregame ceremony hosted by the Dodgers.

His No. 14 jersey is now retired by both teams. Hodges is set to be enshrined in Cooperstown, N.Y. on Sunday, July 24. Stay tuned to “Good Sports” for complete coverage. 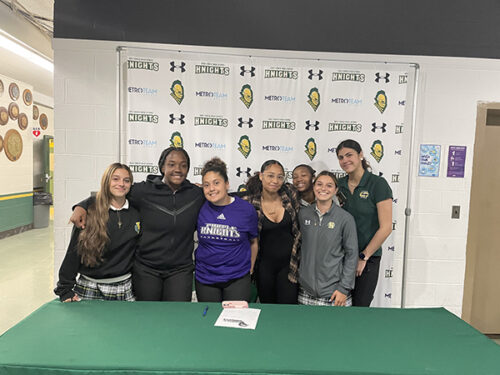 Linet Coste, a senior point guard on the Holy Cross H.S., Flushing, girls’ varsity basketball team, signed a letter of intent to continue her hoops career at the University of Bridgeport, Conn.

The signing is historic, as Coste became the first female student-athlete in school history to receive an athletic scholarship. The school went co-ed prior to the 2018-2019 school year.

Coste was an important piece to the Knights’ run to the Brooklyn-Queens championship title – another first in school history.

“Linet may not have been the captain of the team, but she led by example,” said varsity girls’ head coach Tom Catalanotto. “She being a point guard directed her teammates, and she was a calming force at times of adversity. Her senior leadership helped us down the stretch. I think that she will become a leader someday at Bridgeport.”