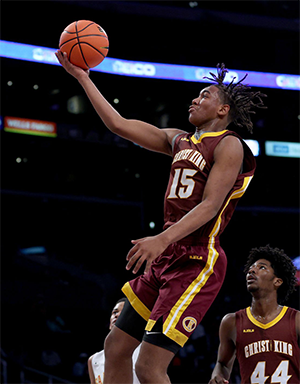 Brandon Williams, a 6-foot-7-inch junior power forward on the Christ the King H.S., Middle Village, boys’ varsity basketball team, was recently ranked the No. 1 player in New York State among the Class of 2023 by ESPN. The team captain averaged 15.6 points, 7.6 rebounds, and 2.0 assists per game this past season en route to being named to the CHSAA All-League First Team and to The Tablet All-Star Team.

Reminder! Brooklyn’s adopted son Gil Hodges will finally be inducted into the National Baseball Hall of Fame in Cooperstown, N.Y., on Sunday, July 24. Stay tuned to The Tablet and “Good Sports” for complete coverage of the long-overage honor for the Brooklyn Dodgers’ legend.

The NCAA-certified event took place June 24-26 and featured teams in the ‘AA,’ ‘A,’ and ‘B’ divisions. The league invited college coaches to attend the slate of games to scout the local talent.