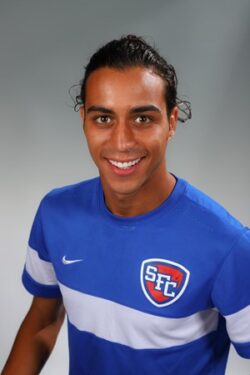 El Mahdi Youssoufi, a senior forward on the St. Francis College, Brooklyn Heights, men’s soccer team, became the first Terrier ever to be drafted to the MLS while still a member of the college team. The native of Morocco was recently selected in the MLS draft by NYCFC. The selection caps off a banner year for Youssoufi, named 2021 Northeast Conference Player of the Year and placed on the United Soccer Coaches All-Northeast First Team after scoring 12 goals last season.

Congratulations to senior Holy Cross H.S., Flushing, track runner Kiana Reyes for being named the winner of the Student Athlete Leaders of Tomorrow Award as given by the U.S. Air Force.

Five local diocesan high school basketball players were among the more than 760 boys and girls student-athletes from around the country nominated to play in the 45th anniversary McDonald’s All-American Games. The games are set to return this March at Wintrust Arena in Chicago.

Of note, Scott recently scored her 1,000th career high school point at the Rose Classic Super Jam. She is set to attend Oklahoma University in the fall.