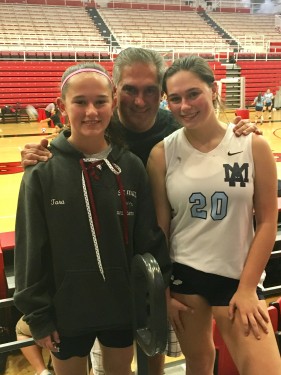 Two sisters have shown the utmost poise in the realm of sports following the sudden death of their mother.

Carolyn, 15, and Tara, 11, Nicholson lost their mother, Colleen, on Oct. 4. In the wake of this tragic event, both girls have been the pillars of courage en route to their sports teams capturing diocesan championships.

Carolyn was the captain of the Archbishop Molloy H.S., Briarwood, junior varsity girls’ volleyball team that completed an undefeated 23-0 season. The team captured the GCHSAA Division I diocesan title en route to a victory in the ‘AA’ city championship.

Tara’s seventh-grade Catholic Youth Organization rookie girls’ soccer team from St. Mel’s parish, Flushing, also had an undefeated season and won its second consecutive diocesan championship, both in undefeated fashion. Tara had the game-winning assist as her free kick set up teammate Mia Ferrara for the only goal in a 1-0 win over Blessed Trinity, Breezy Point.

In both instances, Colleen was watching over her daughters. The St. Mel’s team dedicated their season to Colleen, who was a fixture at every game and an integral part of the Wildcats family. The players wore special patches on their uniform in memory of Colleen.

Sports are often said to have healing powers during tragic events, and no better example can be seen than the strength displayed by the Nicholson family – especially these two sisters – during this fall sports season.

Fernandez, who started at right back and was named a team captain, became the first player in Cristo Rey Brooklyn history to represent the program in this game. The CHSAA defeated the PSAL, 2-0.