The St. John’s University, Jamaica, men’s basketball team is set to embark on a foreign tour of the Dominican Republic. The Red Storm will play three games in four days in mid-August against Dominican U22 National Team, the GUG All-Stars (a professional team affiliated with former St. John’s standout Felipe Lopez), and the Dominican Senior National Team.

The St. Joseph’s University Brooklyn, Clinton Hill, women’s basketball team was recognized for their efforts in the classroom as the Women’s Basketball Coaches Association announced the 2021-2022 Academic Top 25 Team Honor Roll. The Bears maintained a collective 3.190 grade point average for the academic year and were one of three Skyline Conference teams to be recognized. 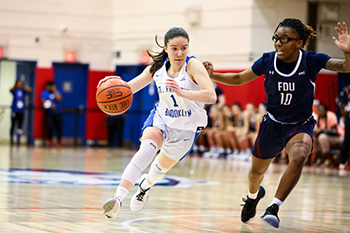