Swiss Skydiver, the 2020 Preakness Stakes winner owned by 1959 St. Francis Prep, Williamsburg, graduate Peter Callahan, made her 4-year-old debut by winning the Beholder Mile at the Santa Anita in California on March 13. Callahan was raised in St. Patrick’s parish, Astoria, before playing football and baseball at the Prep.

In Division II, the Roberts Wesleyan College reached the Tournament’s Sweet 16. The team is coached by Kevin Clifford, who hails from St. Sebastian, Woodside. 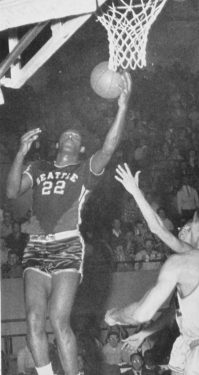 Los Angeles Lakers legend Elgin Baylor died March 22 at age 86 due to natural causes. One of the great NBA stars of the 1960s, Baylor was an 11-time All-Star and 10-time All-NBA First Team selection who was inducted into the Naismith Memorial Basketball Hall of Fame in 1977.

In 1957 – the year before he was selected No. 1 overall by the Minneapolis Lakers in the NBA draft – Baylor was named The Tablet’s Catholic Player of the Year as a member of Seattle University. The Tablet used to poll coaches from 60 Catholic colleges throughout the nation to compile the Catholic All-American basketball team.

While awaiting a start date for their CHSAA regular season, the St. Francis Prep, Fresh Meadows, boys’ basketball teams competed in the NY Madness high school basketball tournament, which took place at Island Garden in West Hempstead, L.I. The L’il Terriers won both of their first two games and advanced to the next round.

St. John’s University, Jamaica, men’s basketball sophomore Julian Champagnie has announced that he has entered the NBA draft process. The Bishop Loughlin H.S., Fort Greene, graduate, was a First Team All-Big East selection this past season and led the conference with 19.8 points per game. He also won the Big East’s Most Improved Player Award. Champagnie will also take the necessary steps to maintain his college eligibility should he choose to return for his junior season with the Red Storm.