RIP Jarrod Sockwell, an assistant varsity football coach at Nazareth H.S., East Flatbush. The 1999 Nazareth graduate passed away due to complications of the coronavirus. He starred as a player for the Kingsmen and returned four years ago as an assistant coach. He also coached as an assistant at Holy Cross H.S., Flushing.

RIP Brother Bob Andrews, F.M.S., who served on the faculty at Archbishop Molloy H.S., Briarwood for more than 40 years. He also coached track and field for nearly 50 years, starting at St. Helen, Howard Beach, and then at Molloy. His teams won a state cross-country championship, 17 CHSAA indoor and outdoor titles and over 75 diocesan championships. He is a member of the CHSAA, Armory and U.S. Track and Field Halls of Fame and also resides on Molloy’s Track and Field Wall of Honor. A memorial Mass will be held at a later date. 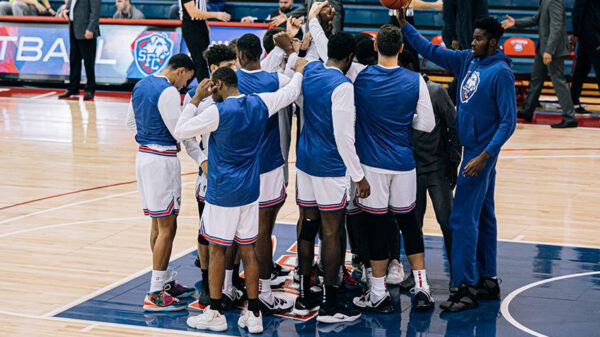 “We are humbled to be honored by our peers, who we have a tremendous amount of respect for,” Braica said. “Every program in the Northeast Conference conducts itself with class and demonstrates tremendous sportsmanship. We have an outstanding group of coaches in this league who instills the proper values in their programs.

“It goes to show the high character of our student-athletes and what a great job their parents did in raising them. We are proud to be a part of such an outstanding group of people and are truly thankful to receive this distinguished award.”

Two members of the Msgr. McClancy H.S., East Elmhurst, girls’ varsity soccer team will be continuing their playing careers in college as teammates. Senior Lauren Lynch and Heather Bollman are set to team up this fall at St. Joseph’s College Brooklyn, Clinton Hill.

President of St. Francis College, Brooklyn Heights, Miguel Martinez-Saenz, Ph.D., has been appointed to the NCAA Committee on Women’s Athletics. The committee helps lead the organization’s efforts to provide equitable opportunities, fair treatment and respect for all women in all aspects of intercollegiate athletics.