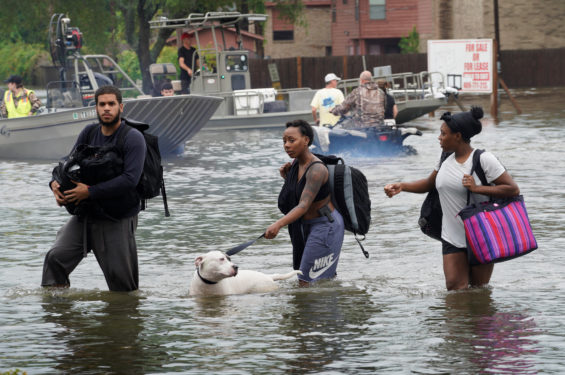 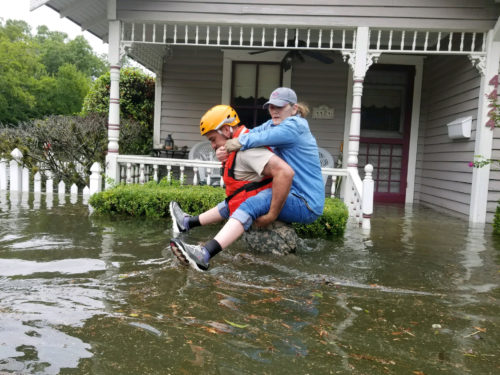 HOUSTON (CNS) – Archbishop Jose H. Gomez of Los Angeles, vice president of the U.S. Conference of Catholic Bishops, asked bishops across the country to consider a special collection to assist victims of Hurricane Harvey along the Gulf Coast.

“Our hearts and prayers go out to the families that have lost loved ones and to all who have lost homes and businesses along with their sense of normalcy. We also stand with our brother bishops in the region who have the difficult task of providing pastoral care in these most trying times while managing their own losses. Our prayerful and financial support is urgently needed,” he wrote.

With floodwater as high as 20 feet from swelling bayous and waterways, thousands of homes in the Archdiocese of Galveston-Houston flooded as Tropical Storm Harvey continued to batter southeast Texas Aug. 28.

Bishops from dioceses along the mid-Texas Gulf Coast, including Victoria and Galveston-Houston, granted dispensations from regular Mass Sunday obligations Aug. 27.

The storm, which made landfall a day earlier as a Category 4 hurricane, was downgraded to a tropical storm and claimed at least four lives. The record-breaking rainfall, as much as 28 inches over 24 hours in four counties in the archdiocese, was “unprecedented” and “catastrophic,” according to the National Hurricane Center. The region typically sees about 49 inches of rain in a year.

In southeast Houston, Father David Bergeron, a member of the Companions of the Cross order, spent Saturday night in his truck on a highway because of rising floodwater. The next morning, he kayaked the flooded streets to try to find wine to celebrate Sunday Mass for stranded neighbors.

Sitting atop his red kayak, Father Bergeron told a local TV reporter on a live broadcast that he was trying to return home to celebrate Mass. He had visited Galveston for a kayak trip the previous day.

“I tried to go back home for Mass and … I didn’t make it,” Father Bergeron said.

The priest used his kayak to visit a nearby convenience store for supplies as well as wine to celebrate Mass for nearby stranded neighbors.

He said he was praying for everyone in need, reflecting on America’s first evangelizers who came by boat.

“I guess this is how the Americas were evangelized as well, with a canoe, and this is a kayak,” Father Bergeron said. “I hope that can bring a smile to a few people.”

“The Lord is alive and the Lord is always with us as well, so I really pray for the protection of all the people. …There are a few psalms that implore for the grace of God and the washing and the rain, but now we have enough rain.”

Thirty miles north of Houston, 29-year-old Eric Robinson spent the morning of Aug. 27 walking three miles in floodwater to morning Mass at Sts. Simon and Jude Catholic Church in The Woodlands even though a dispensation had been given.

In his homily, Father Pat Garrett, pastor, encouraged people to pray for flood victims and first responders. After Mass, Robinson trekked back to his apartment, wading through waist-deep water.

The situation was not the first time the parish has seen floodwater come close to church grounds. In April 2016, the church’s center served as a Red Cross shelter. Activated again as Harvey pounded the state, at least 22 people took shelter at the church by the evening of Aug. 27, parish staff said.

Elsewhere, Danielle Noonan walked through her Sienna Plantation neighborhood southwest of Houston Aug. 27, observing damage caused by a tornado that ripped through the area the previous evening. “I feel like I’m still in shock,” she said.

No sooner than her husband Chris told her to get into the closet where her two sons already were hiding, the tornado touched down a quarter-mile away, damaging at least 50 houses, shredding roofs and windows, snapping hallowed oak trees “like toothpicks” and flipping fences.

The next day, the community tried to recover quickly, but strong rains hampered efforts. Not until a trip to the grocery store for more supplies did Noonan see how shaken by the tornado her two children were.

One of them “was really scared,” she said. “It was hard for him to see his friends’ homes just destroyed. He didn’t want to leave the safety of his home.”

Noonan saw it as a good teaching moment about how to live a life of true prayer and love in the community. In an effort to rally the local churches in prayer, Noonan joined her parish, St. Angela Merici in nearby Missouri City, in hosting the Chaplet of Divine Mercy and praise and worship session on Facebook.

Noonan and her family evacuated to central Texas Aug. 28 under orders of local officials because of rising waters in the Brazos River.

Meanwhile, a social media post about storm damage caused Ashley Ben-David’s jaw to drop. Scrolling through Twitter, the Houston St. Francis de Sales Catholic School fourth-grade teacher saw images of hurricane-ravaged Rockport. The seaside city 30 miles northwest of Corpus Christi was among the first to see major damage from the storm. A photo showed a storied home in the Ben-David family decimated by Harvey; the two-story structure painted in friendly yellow and white was cut in half by winds that topped 130 miles per hour.

At first she denied what she saw in disbelief. “The stairs aren’t in the right spot,” she thought. However, after sending the picture to her two siblings, they confirmed the worst: It was the family home, only Harvey had moved the stairs and trees.

“We’ve had that house in our family for so long,” said Ben-David in the safety of her Sugar Land, Texas, residence. The home belonged to her grandparents.

In a letter to all pastors, Bishop Nicholas DiMarzio has authorized parishes in Brooklyn and Queens to take up a voluntary collection to assist the victims of Hurricane Harvey. He suggested either the weekend of Sept. 2-3 or Sept 23-24 when no other special national collections are scheduled.

The funds will be distributed through the Catholic Charities National Disaster Relief Collection or sent directly to the affected dioceses.