FLUSHING — The Roman Catholic Church often mirrors the life and work of Martin Luther King Jr., as it advocates for social justice, the sanctity of human life, and caring for immigrants and other marginalized people.

Still, history shows times when the Church got it wrong on racism, from a religious order owning plantations worked by slaves to some parishes not welcoming Black Catholics into their congregations.

Ways forward were explored Monday, Jan. 16, during a panel discussion and prayer service at St. Kevin Church in Flushing to honor the legacy of the slain civil rights leader.

The annual event is conducted by the Vicariate of Black Catholic Concerns of the Diocese of Brooklyn and its coordinator, Father Alonzo Cox, pastor of St. Martin de Porres Parish.

Addressing racism is challenging as it festers in the hearts of some people who may not be aware of it, Father Cox said. 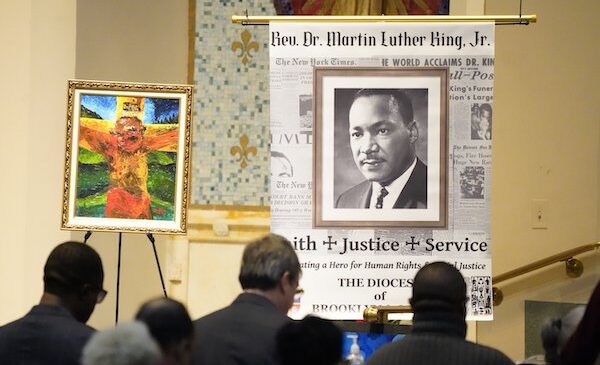 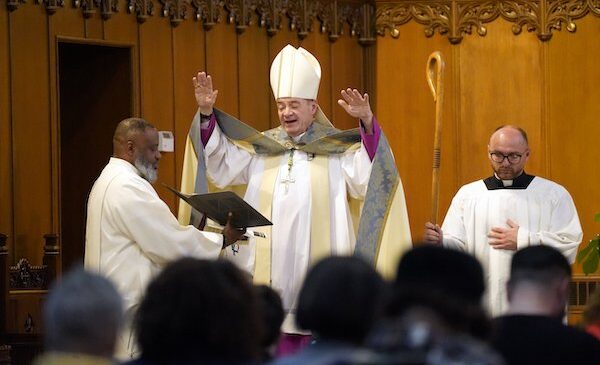 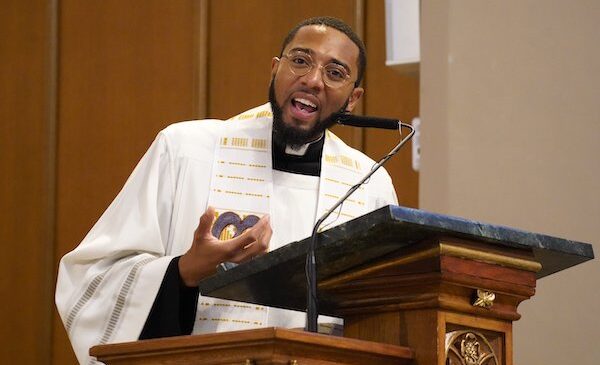 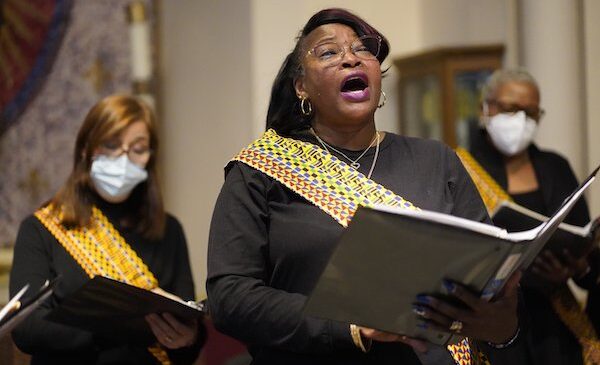 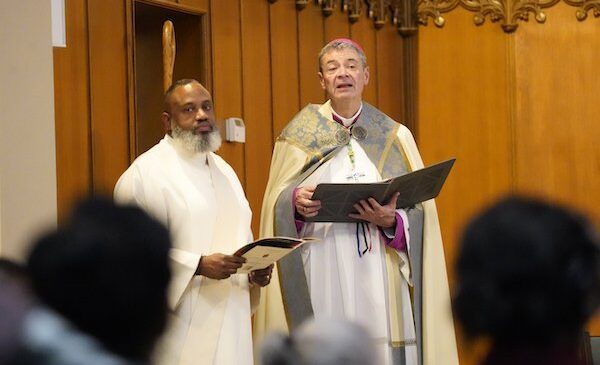 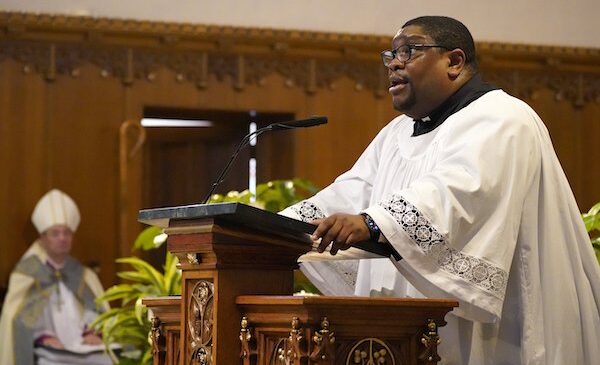 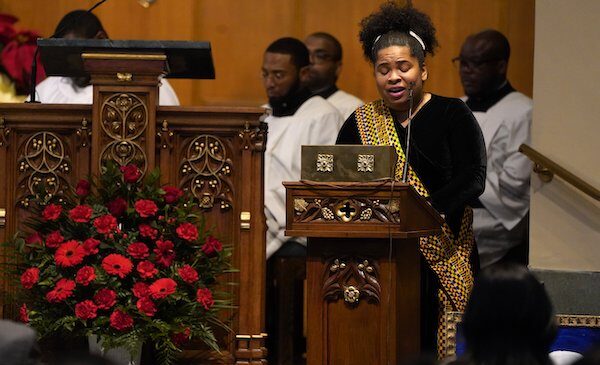 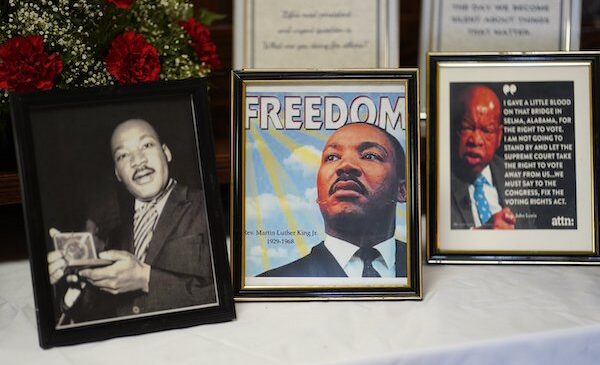 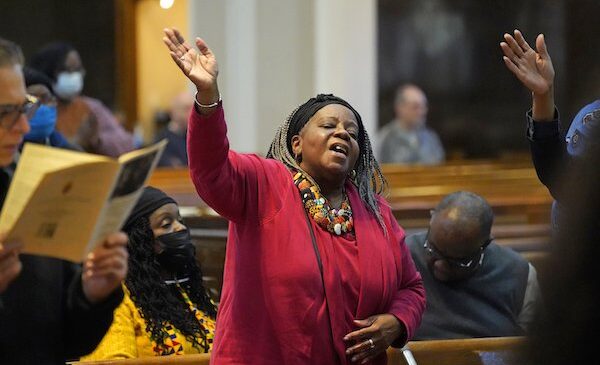 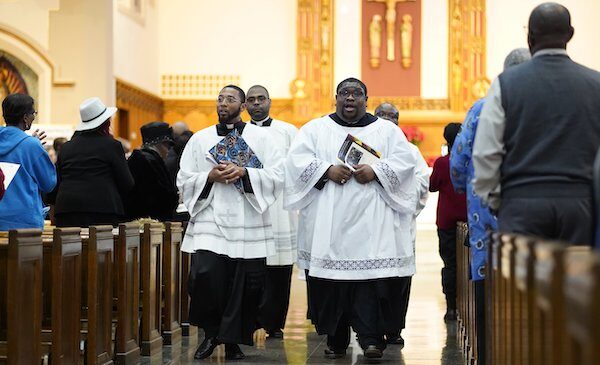 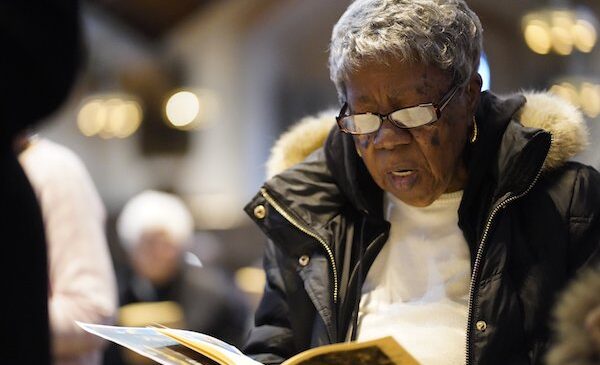 He described how, years ago, his grandmother’s parish closed in Downtown Brooklyn, so Black Catholics went to the Cathedral Basilica of St. James. But they felt unwelcome when told their Mass experience — lively worship music and lengthy but spirited homilies — was unsuitable for the cathedral.

Guest speaker Father Ajani Gibson of the Archdiocese of New Orleans urged people of all races to open their hearts to the Holy Spirit to show them if racism is planted in their inner selves. Such thoughts or feelings can cause people to look negatively at people of other races.

Self-reflection is tough and messy but necessary to unify the Body of Christ, Father Gibson said, adding it’s a matter of being open and honest.

“This is who we are,” he told The Tablet before the roundtable discussion. “This is our history. I invite you to simply embrace it. To immerse yourself in it. And while it may feel uncomfortable, that’s a good thing. Why? Because the Spirit is moving in there.”

Catholic clergy speaking at the panel discussion said Dr. King was just as much a preacher of the Gospel as he was a firebrand for change. As such, he prayed and preached for unity among God’s people.

“But this requires for us to really take our discipleship and our faith seriously and to live it out with conviction.”

Brooklyn and Queens have the distinction of serving more Black Catholics  — about 215,000 — than any diocese in the U.S. The audience also included clergy and a couple of dozen members of the Vicariate’s Youth Leadership Ambassador Program. Bishop Robert Brennan attended the discussion Monday with about 150 people from throughout the diocese.

Later, he led the diocese’s annual prayer service commemorating the 94th birthday of Dr. King, who became the most prominent civil rights leader in U.S. history and the nation’s most enduring warrior for social justice and racial equality.

He was assassinated in 1968 in Memphis.

The Vicariate organizes the event each year, but this year its advisory board suggested ways to amplify the concerns of Black Catholics. To that end, they invited Father Gibson, the administrator of St. Peter Claver Parish in New Orleans. Although he is a newly ordained priest, he has become known nationally for an engaging preaching style that flourished on social media, especially during the pandemic, Father Cox said.

Lorraine Pierre, principal of St. Francis of Assisi Catholic Academy in Brooklyn, moderated the discussion. Joining them on the panel was Deacon Kevin McCormack, the new superintendent of Catholic Schools for the diocese.

Teachers have embraced the curriculum as an opportunity to address current events and equality through faith. Each month, teachers across the diocese receive age-appropriate course materials and books.

“We were specifically looking for a white priest or Deacon who would have the experience of working with African Americans,” Father Cox said. “And I think Kevin was very honest.”

Deacon McCormack, a former principal of Xaverian High School, touched on the racism that still lurks in America.

“The insidiousness of racism is that it may not be as it was with the fire hoses and dogs 50 years ago,” he said. “It’s more subtle, and sometimes it’s not even recognizable. That’s where individuals have to begin to challenge themselves and to see, ‘Where do I fit into this?’ ”

Deacon McCormack said he feels Dr. King’s challenge to search his own heart with guidance from the Holy Spirit.

“This is the kind of thing we need to bring to our 68 grammar schools and 15 high schools to begin to challenge everybody. It has to start with the young, teaching our young kids to be self-critical and see systematic issues on a broader plane.”

But speakers and audience members also challenged themselves to do more in their community.

They urged each other to take seriously the responsibility of mentoring young men and women in the Catholic faith, especially in encouraging them to consider vocations as clergy or religious sisters.

And another consensus emerged — that priests should be shepherds of everyone, regardless of race.

“We are not calling up priests to be all things to all people,” Father Gibson said. “But they need to be able to minister to all people.”

Victor Antoine, a member of St. Peter Claver Parish in Bedford-Stuyvesant, called upon the audience members to embrace their faith with a singular identity.

“I am not a Black Catholic,” he exclaimed. “I’m Catholic. Because, I wasn’t raised to be a Black Catholic. I grew up at St. Peter Claver. … All we did was instill in us the Catholic doctrine. I am emphatically in line with that.”

Antoine said this identity means a Black Catholic and a Catholic of any other race are the same — equal and beloved members of the Body of Christ.

The Vicariate asked to hold the event at St. Kevin Church, which is predominantly Irish and Italian, with a growing membership of Asian Catholics, according to Father Robert Mema, the pastor.

“The advisory board this year said, ‘You know, we’re preaching to each other,’ ” Father Cox said. “If we hold the prayer service in a predominantly white parish, they’re gonna come. And the pastor had said, ‘My parishioners would love to be a part of this.’ We saw a good chunk of them there.”

Father Mema said he looks forward to seeing where the event will be next year.

“If it’s offered to me again, I will gladly accept,” he said. “Wherever it may be, I’m most likely to be attending, with the grace of God.”

Bishop Brennan said the work accomplished Monday should be broadened and that all Catholics can play their unique roles.

“I think it’s an ongoing conversation,” he said after the prayer service. “One of the points of a day like today is that we can listen deeply to one another and pay attention to the experiences of one another.

“We always want to act with deep respect for all people in all circumstances.”