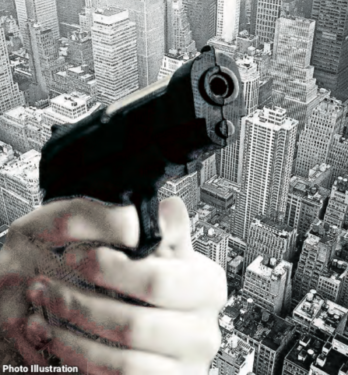 “We have to do something to get rid of the guns,” Bishop DiMarzio said. “People use them. It’s unfortunate that they just use guns, that this is the way they settle their problems.”

The next mayor of New York City could either be one of two former police officers or a community activist who founded an internationally known citizens’ patrol group.

All three say the city’s recent escalations in gun violence are the No. 1 issue in the race. And all three say they’ll pursue policing tactics, like the “anti-crime unit” that worked in the past but still became controversial.

But the two former cops, Democrat Eric Adams and Conservative Party candidate Bill Pepitone, along with Republican Curtis Sliwa, founder of the Guardian Angels, differ on some ideas, like how to revise the anti-crime unit.

Bishop DiMarzio, interviewed on July 26, noted three shootings over the previous weekend. The next weekend, there were seven more shooting incidents, which left at least three people dead, and 15 others injured.

“This is ridiculous,” Bishop DiMarzio said. “How do you get the guns off the street? I don’t know; that is beyond my competence. All I know is something needs to be done.”

“If you don’t want police to be aggressive in finding guns, OK, but then you’re going to have guns,” he added. “We can’t have that in society. Something has to be done to get back public safety in this country, and in our city, especially.”

His campaign did not respond to requests from The Tablet seeking an interview.

However, in campaign literature, Adams said, “The No. 1 driver of crime spikes in the city right now is gun violence.”

“We must reverse this troubling trend fast,” he added, “by using … smart policing, and coordinated tactics between agencies and the community.”

Topping this candidate’s list of proposals is a “reinventing” of the anti-crime unit as an “anti-gun unit.”

In June 2020, Mayor de Blasio ordered these undercover officers in plainclothes to be put back in uniform and given other responsibilities. This was at the height of the NYC protests against the in-custody death of George Floyd in Minneapolis. This mobile unit, about 600 strong, was credited with removing illegal guns by aggressively stopping people in traffic or on the street.

Still, they were also known to be aggressively rough and people didn’t always know they were dealing with officers on first contact, Adams has said. But, knowing how this tactic has been effective, Adams wants it back. He also promised to remove “overly aggressive cops.”

Adams has also called for a major disruption of the so-called “Iron Pipeline” of illegal handguns. New York City already has some of the staunchest gun-control laws of U.S. municipalities; bringing more guns in illegally can only happen covertly.

Thus, he wants to form a “Tri-State Commission” and a multi-state East Coast compact, that would stem the flow of illegal guns.

Also, Adams wants to develop cooperation with transportation agencies to use “spot checks like the ones we use in subway stations,” to nab guns in bus terminals and light-rail stations.

For example, he wants to “fully fund” the city’s Crisis Management System (CMS), which deploys “violence interrupters” — often former gang members — to help resolve disputes. He said he’d take the CMS a step further by fostering better communication between its staff and the NYPD to “prevent retaliatory violence once a shooting has occurred.”

“Democrats are the dominant party citywide,” Browne said. “(They) outnumber Republicans 7-1. And, Eric Adams — somewhat of a centrist compared to many of his primary rivals — will have some crossover appeal on election day.”

But polling suggests Adams’ stance on public safety resonated with voters and distinguished him from other Democrats in the primary, Browne said.

“Eric Adams,” Browne explained, “deftly made restoring law and order in NYC an early and consistent part of his winning primary campaign and leveraged his personal and professional experience as a retired NYPD captain to broaden his appeal to voters.”

Sliwa founded the red-beret-wearing Guardian Angels in 1979. But he is also known as a longtime NYC talk-radio host with sometimes salty commentary on politics and current affairs. Sliwa suggested that gun buybacks and summer job programs could play a role in throttling crime, but only slightly.

“They can’t hurt,” he said. “I’m sure that helps in some instances. You want to do that, knock yourself out.

“But what hardcore gang-banger who’s slinging drugs and making hundreds of dollars each week is going to give up his 9 mm and then all of a sudden, you know, be involved in peace, love, and happiness because of a summer job? It’s ludicrous, and it’s so naïve.

The first step, he added, is getting the NYPD’s undercover anti-crime unit back on patrol and in plainclothes.

Sliwa acknowledged that some of these officers acted too aggressively.

“What the community didn’t like,” Sliwa explained, “is that they would jump out of their vehicles, throw you up against the wall, and immediately frisk you. Well, you want to modify it, that’s fine. But you don’t disband the unit. They were responsible for removing 20% of the guns.”

Sliwa added that gang members can spot a uniformed officer “a mile away.” Therefore, plainclothes officers are essential.

Without them, Sliwa said, “you’ve opened up the streets to a system in which the thugs know they don’t have to worry about undercover police officers.”

Sliwa pointed to data from 1992 showing that there were two million guns in New York City: “I can’t imagine that number has gone down. It has probably gone up.”

Meanwhile, he argued former Republican mayors, Rudy Giuliani and Michael Bloomberg, presided over periods of plummeting violent crime stats, but the penalties of possessing a firearm in public were understood and enforced. Therefore, Sliwa said, most of the estimated two million guns were kept inside homes or businesses.

“They weren’t being used as often outdoors,” he said. “And that’s because there were consequences for your actions.

“But now, it doesn’t matter; you can get caught with a fully loaded handgun and it’s a very good chance — because you didn’t fire it at somebody — that you’re going to be released back onto the streets.”

People facing gun possession charges are released to await trial because the courts are so backed up, Sliwa said.

“So,” he explained, “that’s why you have this tremendous escalation of gun violence and gang retaliatory violence because there are no consequences. It’s chaos and anarchy.”

NYPD commanders and Mayor de Blasio have also pointed to the state’s clogged criminal justice courts as another cause for crime spikes. Sliwa’s solution: Create a special prosecutor to oversee gun-violence cases. This office, he said, would be similar to the Special Narcotics Prosecutor for the City of New York (snpnyc.org), but focused on gun cases in all five boroughs.

Adams has said he “helped push through reforms, including the successful effort to stop the unlawful use of stop-and-frisk.” Sliwa and Pepitone acknowledged the controversial technique was overused, but they still favor it. Sliwa called it constitutional and “absolutely a tool.” Pepitone, however, has the perspective of a police officer who saw it used successfully and overused in an attempt to boost police-efficiency statistics.

Pepitone became a New York cop in 1989, following in the steps of his own father. He went on to become the NYPD Safety Service Coordinator and retired in 2009.

But stop-and-frisk became a magnet for criticism from social justice advocates who said it allowed police to stop, detain, and sometimes search large swaths of people in minority communities. The three candidates have acknowledged there is truth to that, but contend it can still work if used fairly.

“I think,” Pepitone said, “the phrase has always been ‘stop, question, and frisk.’ That’s the way I was taught in the [Police] Academy and the way I taught other recruits.”

Pepitone explained that officers can stop someone “based on a lot of factors.”

“Anything that raises the police officer’s suspicion gives him the right to stop someone and question,” Pepitone said. “Now, at that point, the police officer doesn’t have to frisk the person. It’s not ‘stop, question, and must frisk.’ It’s ‘may frisk.’

“And the police officer may frisk the person if the officer can articulate that he fears for his safety. They don’t have to, but they may.

“Now, where it all went wrong, is when that became part of a police officer’s productivity goals.”

Pepitone explained police turn in activity reports of their arrests and other interactions with people. Their performances are graded through their activity, he said. But stops became part of a quota system that put officers “in a very bad position where they have to go get these numbers to appease their bosses.”

“And as we saw, it reached a boiling point where the communities had enough. And police, to be quite honest, had enough of being forced to do it. It caused a lot of problems … that we’re still dealing with today.”

Pepitone said the next mayor must direct NYPD to aggressively attack rising crime with techniques like the anti-crime unit and stop-and-frisk, but with proper oversight to ensure they don’t unfairly target minorities.

“You really need a joint committee of police and civilians,” he said. “That includes police supervisors, city residents, people from the mayor’s office, and probably the mayor.”