FRESH MEADOWS — Educators in the Diocese of Brooklyn believe that teaching Eucharistic Adoration to children as young as a kindergartner starts them on a lifelong path of experiencing one-on-one connection with Christ.

Adoration is the worship of Jesus Christ outside of Mass, with the Eucharist displayed in an open tabernacle or in a monstrance. The host is the actual presence of Jesus, according to Catholic teaching.

In this hushed but focused face-to-face encounter of adoration, people can experience direct communication with their Savior.

But while this act of worship in the presence of a consecrated Eucharist goes back to the Church’s origins, it was not emphasized to the parents and grandparents of today’s elementary and high school students.

That might explain why a 2019 Pew Research survey asserted that most Catholics — about two-thirds — don’t believe the Church’s position that Jesus Christ is present in the Eucharist. Conversely, they believe that the sacramental wine and bread are just symbols of Jesus.

Recognizing that, effective teaching is critical to avoid confusion about the Eucharist, educators say.

Father Ralph Edel, the chaplain at St. Francis Preparatory School in Fresh Meadows, knows this is a formidable task.

“I’ll say this for myself: as a kid, I found it really difficult to understand what my teacher was talking about,” Father Edel said. “It’s not that she did a poor job. I just think it’s hard for a 7-year- old to understand, right?”

Time for a Revival

In response to the Pew survey, the U.S. Conference of Catholic Bishops announced last November the creation of a new “Eucharistic Revival.” It officially began on Sunday, June 19, the Feast of Corpus Christi.

The culmination of this three-year revival will be the National Eucharistic Congress in Indianapolis. It will be the first such congress held in the U.S. since 1975.

During this revival, the U.S. bishops urge all dioceses to sponsor activities at the parish level to teach and reinforce a basic tenet of the Catholic faith — that Jesus is present in the Eucharist.

Bishop Brennan has organized the Committee for Eucharistic Revival to devise a diocesan plan. To that end, the committee is developing ideas for parishes to help its members, including Holy Hours, Eucharistic processions, and workshops.

Meanwhile, Catholic school educators and catechism teachers assigned to each parish do their best to teach the mysteries of the Eucharist early and often.

“If I drop a 17-year-old, who’s never been to Eucharistic Adoration before, into a chapel with a monstrance and say, ‘Sit here for an hour’ — it’s going to be really difficult for (him or her) to get something out of it,” Father Edel said. “So my philosophy about it has been, from the grade school level all the way up through high school, to build young people up in that direction.

“The idea is to ease them into that process.”

He believes the second grade is the best time to start because, he said, Catholic academies in the Diocese of Brooklyn do great work preparing for first holy Communion. Adding Eucharistic Adoration to their lessons is appropriate, the chaplain said.

“It would be wonderful if second-grade classes, before they receive Communion, spend just five minutes in front of the Blessed Sacrament,” Father Edel said. “Then, as third graders, they can do seven to 10 minutes.” 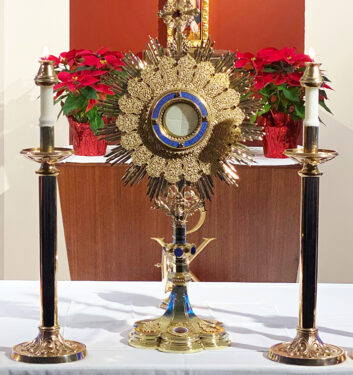 “We start all the way from kindergarten,” said Father Velásquez, pastor of St. Brigid Parish. “On first Fridays, we do Eucharistic Adoration following the school Mass. Classes come over for periods of slots for adoration.

“When they’re in kindergarten, we only bring them over for maybe about five or 10 minutes. Many times I like to bring them up to the steps of the sanctuary, and I explain to them that we’re right before the Blessed Sacrament, how that’s Jesus, and how usually He’s in a little gold box in the back called the tabernacle, but now He’s in a monstrance.

“As they get older, you know, they don’t need as much direction.”

“It takes convincing sometimes for principals and for teachers,” he added. “But, I’ve done this in the past two parishes that I’ve been in, and it bore tremendous fruit.”

“I’m a big proponent of adoration for the [Faith Formation] kids,” he said. “For 15-something years, I’ve been making sure the kids come over for adoration. Because I was never exposed to it as a kid. For me, it wasn’t until I was 21 years old. I was still in the Air Force before seminary.”

Father Edel said students at St. Francis Prep can spend the better part of an hour in Eucharistic Adoration.

Still, some of them admit to navigating a “learning curve.”

Emma Bogdan, a senior, said her first experience with it was in the seventh grade.

“My entire class sat together and prayed every first Friday,” she recalled. “I originally thought that Eucharistic Adoration was just looking at it for an hour. After the first time going, I understood it meant much more. It was a peaceful time to pray and reflect.”

“Eucharistic Adoration was at first confusing to understand since I was young when I first learned about it,” she said. “As I entered high school, it started making sense, and I was able to really appreciate it.” (See more students’ comments below.)

Bogdan and Corrao are among 25 seniors who are Eucharistic ministers at the school — the most ever in the school’s history.

“And,” Father Edel noted, “it is a 100% money-back guarantee related to their time spent in front of the Eucharist.”

As Eucharistic ministers, these students help Father Edel administer Communion to the entire student body, which this year is 2,400 people, making it the largest Catholic high school in the U.S.

“I’m good, but I’m not that good in terms of distributing Communion,” he said. “So I need as much help as I can get. They will sort of spread across the building, and they’ll help me in every major liturgy of the year.”

FRESH MEADOWS — Five students at St. Francis Preparatory School recently described how they discovered Eucharistic Adoration. They are among 25 seniors who serve as Eucharistic ministers at the school.

“I came to understand it in the 8th grade. I was happy and joyful and began to think and express interest. I began to practice it in the 10th grade and into junior year. My interest in the Church gave me the upper hand in wanting to become a Eucharistic minister.”

“After the first time going, I understood it meant much more than I originally believed. It was a peaceful time to pray and reflect with my classmates. Eucharistic Adoration helped me appreciate the Eucharist itself more.”

I was 13/14 years old when I first heard about Eucharistic Adoration. I came to understand it halfway through the 8th grade. It influenced my decision to become a Eucharistic minister because it made me realize how important getting involved in the religious community is.”

“I was 13 years old when I first heard about Eucharistic Adoration. This experience confused me at first as I didn’t understand the significance. I began to take part in Eucharistic Adoration after becoming more active in my faith and campus ministry. I now have a great appreciation of the Eucharist.”