The mission statement of Our Lady of the Snows Elementary School, North Floral Park, is the following:

“Our vision is the preservation of our strong Christian environment and high academic standards. We will work conscientiously to realize our ideals in a community that is contemporary, enthusiastic, unbiased, and open to the future.”

The very humble, unassuming principal has passionately served the Snows community for the past 27 years – never seeking an ounce of recognition for her work.

However, her dedicated service led to her being named the recipient of the New York region’s 2013 Distinguished Principal Award as granted by the National Catholic Education Association (NCEA).

Even with this distinguished honor and her 40-plus years of service in Catholic education, Sister Roberta – in keeping with her compassionate, endearing ways – was quick to acknowledge her peers for their support.

“I accept this great honor in the name of all of the dedicated principals in the Diocese of Brooklyn who work very hard every day,” she said.

“I am very delighted that she (Sister Roberta) is being acknowledged for being such a great principal,” said Auxiliary Bishop Raymond Chappetto, who was the pastor at Our Lady of the Snows for 13 years. “I was able to witness firsthand how effective she was as a principal, and I’m grateful that the school and community flourished under her leadership.”

Sister Roberta grew up attending elementary school and Mass at St. Benedict Joseph Labre, Richmond Hill. Her parents and siblings all went to the school as well.

Though the school has now closed, Sister Roberta said that the Sisters of St. Joseph who taught there helped her discern her vocation. She took her final vows in August, 1971.

She later earned her bachelor’s degree in education from the Sisters of St. Joseph’s formation college. She taught for five years at Most Holy Trinity School, East Hampton, L.I., and attended the State University of New York at New Paltz on her summer vacations for her master’s degree.

From there, she taught kindergarten at Blessed Sacrament School, Cypress Hills, for nine years. During that time, the Sisters of St. Joseph approached Sister Roberta about becoming a principal, but she felt that she had not yet had enough experience working with older children.

But after three years teaching sixth, seventh and eighth grade at St. Stanislaus Kostka School, Maspeth, Sister Roberta took over as principal of Our Lady of the Snows in 1986.

She said one of her main joys is watching the children grow. Over the years, she’s had to adapt based on the changing nature of education.

She said her support system – including the faculty, staff, secretaries, teacher aides, school nurse and the parish pastors – has made her job much easier. This support system is what keeps the school going strong.

“Being here so long, I see our graduates bringing their children back and enrolling them in the program,” Sister Roberta said. “They received a quality education here, and that’s what they want for their children.”

Last October, Sister Roberta was informed by diocesan Superintendent of Schools Dr. Thomas Chadzutko that she had been nominated for the NCEA award. She filled out a 12-page application that included multiple reflection questions per page and gathered letters of reference from a fellow principal, a teacher and a parent.

She was joined in Houston by her brother, Sulpician Father Jim Oberle who works at the University of Dallas, Irving, Texas; Remee Mallay, an upper-grade science and religion teacher at Snows; and Mallay’s husband, Ed.

“In receiving such a prestigious award on a national level, it demonstrates how Sister Roberta is well respected in the school and parish communities as well as in the Diocese of Brooklyn which nominated her,” said Father Kevin McBrien, current pastor at Our Lady of the Snows. “Without a doubt her religious community, the Sisters of St. Joseph, is delighted for her, and together all of us are ecstatic for the recognition she will receive on a state and national level as Distinguished Principal.”

Father McBrien surprised Sister Roberta with a banner in the school’s main lobby recognizing the award. He said he had to sneak into the building to hang it, since Sister Roberta is always in the main office fulfilling her duties.

Of all her duties, Sister Roberta said she and her faculty stress the importance of bringing the children closer to Jesus Christ and teaching the children respect. She credited her faculty with doing an outstanding job in accomplishing these goals, but it’s been her leadership at the top for the past 27 years that has enabled the Snows community to thrive.

Below photos were taken at the NCEA convention in Houston (Courtesy Edward Mallay). 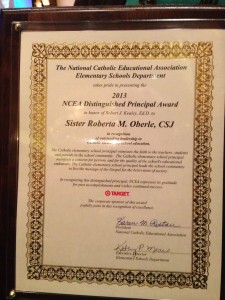 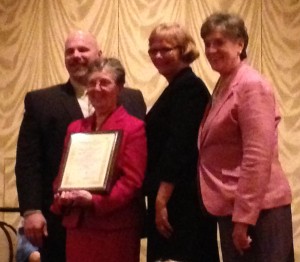 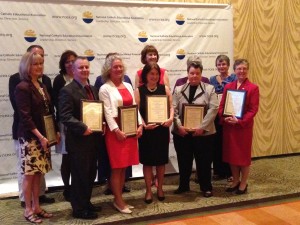 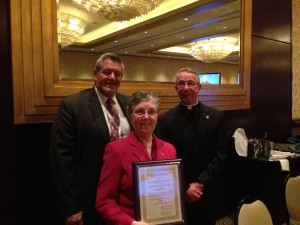 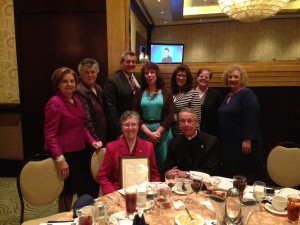