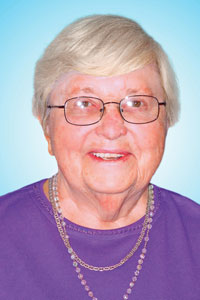 She lived her mission as an educator and in the Human Services field; she ministered for 10 years coordinating volunteer services at Mercy Hospital with our Nursing Sisters of the Sick Poor. Sister Regina was recognized as a Woman of Distinction by New York State Senator Caesar Trunzo in June 2004.

Sister Regina was born in Queens and attended St. Clement Pope elementary school and Our Lady of Wisdom Academy. She then attended Queens College. She entered the congregation in 1951 from St. Clement Pope parish, South Ozone Park.

Among her many awards, Sister Regina was also recognized as a Habitat for Humanity Volunteer of the year (2005). She was also President of Suffolk County Inter-Agency Community Council.

Her funeral Mass was offered on March 7 at Maria Regina Chapel. Burial was at Calvary Cemetery, Brentwood.