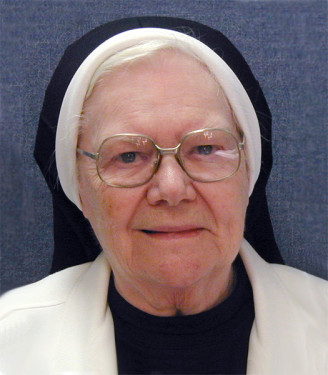 Born in Brooklyn and baptized Elizabeth, she was the first of three sisters to become Sisters of St. Dominic.

She entered the Amityville Dominican Congregation in 1939 from St. Cecilia parish, Greenpoint.  In 1943, she pronounced her vows.

Her first assignments were as an elementary school teacher in Blessed Virgin Mary Help of Christians, Woodside, and Our Lady of Lourdes, Malverne, L.I. She then served as principal of Corpus Christi School, Mineola, L.I., and St. Joseph School, Astoria.

In 1970, she was named coordinator of Queen of the Rosary Motherhouse, Amityville. Four years later, she became librarian at St. John the Evangelist School, Riverhead, L.I.

She held a degree in English literature and was state certified in nursing home administration.

In 1977, she began her pastoral service to the elderly and homebound in Our Lady of Mercy parish, Forest Hills, where she remained for 34 years.

She served the elderly of Forest Hills in varied ways: bringing Holy Communion, transporting them to the Golden Age Club, shopping, taking them to doctors’ appointments, helping with finances and getting financial assistance, expanding the number of Meals-on-Wheels recipients, arranging “pop” visits by school children and calling upon volunteers to cook meals for them.

She was known for making candy, which she put in birthday and Christmas cards for elderly parishioners.

In 1979, she was selected to serve two weeks as a senior citizen intern in the Washington, D.C., office of Congresswoman Geraldine Ferraro, where she advised Ferraro on matters pertaining to Queens seniors.
Failing health necessitated a move to the Motherhouse in June, 2011.

Interment was in the Sisters’ cemetery in Amityville.