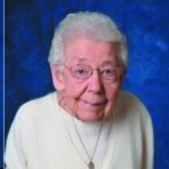 Locally, she taught sixth grade at Resurrection-Ascension School in Rego Park, 1951-55. She later served as president of the Mount Saint Vincent University in Halifax, 1974-78.

She additionally ministered in Patchogue, N.Y.; Massachusetts, and Halifax until her retirement in 1999. A Mass of Christian Burial was held at Mount St. Vincent, Wellesley Hills, Jan. 5. Burial followed in St Mary’s Cemetery, Needham.