Last weekend, I had the occasion to celebrate two Baptisms. The first one on Saturday was for my great-niece, Laura Grace, daughter of my nephew Frank DiMarzio and his wife, Priscilla, who is a Brazilian-born immigrant to the United States. On the next day, by happenstance, I was at St. Joseph Co-Cathedral celebrating the Spanish Mass and baptized the daughter of Mexican immigrants.

The Gospel I read for the Baptism on Saturday was Matthew’s depiction of the little children coming to Jesus and the disciples trying to keep the children away from Him. I could not help but reflect on my experience of World Youth Day seeing Pope Francis kissing every baby that was handed up to him and also the Holy Father asking for others to be brought to him, while the security guards, I am sure, were hoping that there were less than more babies to be kissed.

Pope Francis recently explained the situation in which he found himself in his former Archdiocese when a widowed and poor woman who worked as a maid approached him with a dilemma she faced. She said to the then-Cardinal Jorge Mario Bergoglio, “Father, I am in mortal sin, I have seven children and have never had them baptized. I don’t have the money for the godparents and for the party…” 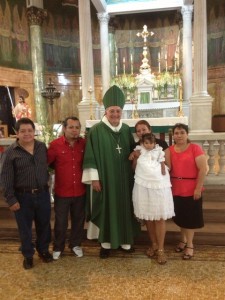 He saw her again, and after a little catechesis, he baptized the children in the chapel of the archepiscopal residence. The woman said to him, “Father, I can’t believe it, you make me feel important.” He said to her, “But madam, what do I have to do with it? It’s Jesus who makes you important.”

In another incident, we recognize then- Cardinal Bergoglio directed his priests not to turn away anyone for Baptism or make difficult rules of periods of preparation, since children who come from families who ask for Baptism should be baptized.

There is much to be said about infant Baptism, its preparation and occasional withholding of Baptism when it is requested. First of all, a Baptism request from parents must always be taken seriously, since the request itself indicates motivation to share the gift of Baptism with their child. Truly, Baptism is a grace and a true gift that cannot be withheld except for some serious reason. There are many opposed to infant Baptism with the excuse that they want their children to choose their faith for themselves. My simple response is that the same parents would not allow their children not to eat and let them wait until an adult age to make that decision. Baptism is a gift of grace in which people of faith share with their offspring.

There are many new questions arising from the dilemmas that confront our parish priests and deacons when Baptism is requested, especially from persons who are not practicing the faith or seem to be in some way alienated from the faith because of their behavior. I always try to give the child the benefit of the doubt. If some sign of faith is presented with the assurance that the child will be reared in the faith, which is, perhaps, the only requirement that we can make if we were to withhold Baptism. Unfortunately, today we do see cases where there are contrary signs to proceeding with a Baptism because of a lack of faith or poor motivation on the part of those asking for Baptism. 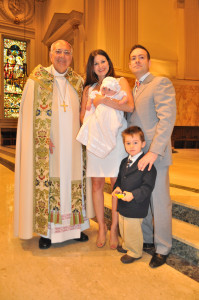 It is unfortunate that today we see fewer parents having their children baptized for various motives. The CARA Report for Summer 2013 featured an article chronicling the decline in baptisms over the last 50 years. According to the report, “From 1995 to 2004 there was about one Catholic infant baptism for every four births in the U.S. This is how Catholicism remains a quarter of the U.S. population. Some leave before reaching 18 and some of these people come back later in life. Immigration also adds numbers. But after 2004 the pattern begins to shift with several years of more births (until the recession) and fewer Catholic infant baptisms.” Moreover, in confirmation of this trend, “there were more First Communion celebrated nationally in 2011 than infants baptized.”

Some are not practicing the faith themselves, and have little interest in conferring this gift upon their own children, while others are vehemently opposed to the practice of faith. We must be careful in making decisions regarding Baptism in the era of the New Evangelization. We must reach out to those on the margins of the practice of faith and assist them in practicing it in whatever limited way that they understand. Faith truly is a gift that grows for those who profess the faith.

Each Baptism is an experience of putting out into the deep waters of the fount of life. In Baptism, we are called to be buried with Christ in the life-giving waters that wash away Original Sin and make us the adopted children of God. Join me in praying for the parents of today, that they will make the right decision regarding baptizing their children and that our Church will ever be welcoming to those who express their desire to pass on their faith to their children.