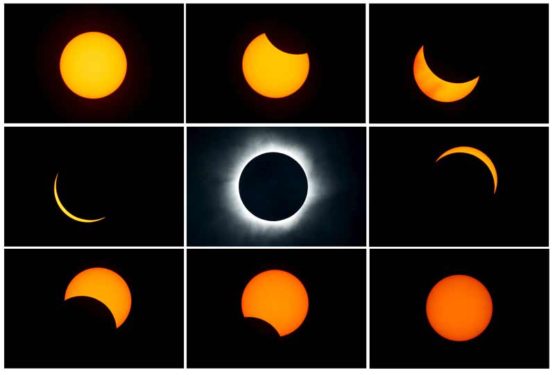 WASHINGTON (CNS) – For the first time in 99 years, the summer sky will turn to night at midday Aug. 21 during a solar eclipse along a 70-mile wide path from coast to coast.

Sweeping through the country’s heartland, the eclipse will give millions of people the opportunity to step back from everyday concerns and appreciate how the universe works, said Jesuit Brother Guy Consolmagno, director of the Vatican Observatory.

While there have been other total eclipses in the U.S., they have only crossed through a handful of states.

“Anything that reminds the people that the world is bigger than the latest crisis in Washington or another game in San Francisco, all of that calls us out of our everyday life,” Brother Consolmagno said. “We’re people. We’re more than well-fed cows. We’re part of the universe. And that longing is what pulls us toward God.

“But even more than that if you already believe that this universe is God’s creation, then looking at an event like this with the eyes of faith, you can’t help but be filled with awe and gratitude. Awe because God made things so marvelously, and gratitude because he gave us the ability to appreciate them,” he said.

Astronomers advise viewers not to directly look at any solar eclipse without proper eye protection. Special glasses, which are inexpensive, can be purchased to wear during the partial phases of the event. Once totality begins, it is safe to remove the glasses and take in the glory.

Total solar eclipses occur once every 18 months on average, but they are often in remote areas that are difficult to get to.

An eclipse occurs when the moon’s orbit takes it directly in front of the sun, casting a shadow on the earth. The moon’s orbit is tilted just enough to prevent an eclipse from occurring every month.

The August eclipse will take about 90 minutes to cross the country on a diagonal path from Oregon to South Carolina. The moon’s shadow will pass over Idaho Falls, Idaho; Casper, Wy.; Kansas City (northern part) in Missouri and St. Louis (southern part); Nashville, Tenn.; and Charleston, South Carolina, as well as countless towns and rural communities. Some 12.2 million people live in the path of the eclipse and millions more are expected to travel into the path of totality.

The entire country, including Alaska and Hawaii, all of Canada, all of Mexico and even northern South America will see a partial eclipse.

Maximum eclipse – at two minutes and 40 seconds – takes place in Hopkinsville, Ky. Parishioners at Sts. Peter and Paul Church in the southwestern Kentucky town of 32,000 have been preparing for months.

“Everybody in town certainly knows it’s coming,” said Jim Creighton, a Sts. Peter and Paul parishioner and a member of the parish’s Eclipse Committee. “You can’t listen to the radio without every couple days hearing something about Hopkinsville being the point of maximum eclipse.”

The eclipse also will give observers the chance to see nature in action. As darkness descends, birds will begin to roost, the temperature will fall several degrees and some flowers may close. During the eclipse stars and planets – especially elusive Mercury – will appear. A white glow appears along the horizon.

It’s the sun and moon that provide the real show though. It is only during a total solar eclipse that earthbound observers can view the sun’s corona, or outer atmosphere. It emanates for millions of miles from the sun’s surface, but it can be viewed only when the moon blots out the disk of earth’s nearest stellar neighbor. Scientists study the corona to better understand star structure.

Brother Consolmagno will join parishioners for the eclipse – his first, if the one in Munich in 1999, which got rained out, doesn’t count. He had planned to recreate Arthur Eddington’s 1919 experiment that showed how the light waves of stars are bent by the sun’s gravity, but plans to get the proper equipment in place fell through. Eddington’s findings helped prove an aspect of Albert Einstein’s theory of general relativity.

In the days leading to the eclipse, he will speak to students at the parish school and deliver another talk about faith and science at the parish.

Astronomers see the eclipse as a way to interest people in observing the heavens and understanding that Earth is a tiny component of an intricate universe.