Thanksgiving arrived early for one of Sheepshead Bay’s biggest families. St. Mark Catholic Academy came together to pray, eat and celebrate the gift of their school community Nov. 25.

Festivities began at St. Mark Church with morning Mass, before students proceeded to the school auditorium. Eyes widened as students saw that it had been transformed into a dining hall offering a feast for the senses from the autumnal décor to the aromatic dishes being served up family-style by parent volunteers.

Then table by table, students went to fill their plates with turkey and all the trimmings. A spread of pies, cakes and cookies awaited them for dessert.

A team of nearly 30 parent volunteers prepared this year’s feast for over 200 students, nursery through grade eight. Parents arrived at 7 a.m. to accept trays of food, warm it in the school kitchen and then set up chafing dishes and Sternos until it was time to eat.

Every family contributes something to the meal, explained Carol Donnelly, principal. Parent representatives for each class cook the turkeys, and coordinate what foods other parents in the class will prepare for the dinner.

“I think the fact that it’s not the school that’s preparing it – it’s every child, every family preparing it – makes everything more special,” said Claire Saintil-vanGoodman, class parent for the eighth grade.

“When they come together with their friends and classmates and teachers, it makes them very excited,” shared Minelia Cleland, seventh-grade class parent, who cooked one of the many turkeys served at the feast.

Recognizing that not every child enjoys a traditional Thanksgiving at home, the parents’ association began hosting the event several years ago.

“We’re very diversified in this school,” said Michael Davis, president of the parents’ association. “I think we have over 50 different nationalities.”

He noted that there are many “Muslim families, Pakistani families, Nigerian families. Some of these nationalities don’t necessarily celebrate Thanksgiving. … So we try to show the children what a Thanksgiving meal is all about.” 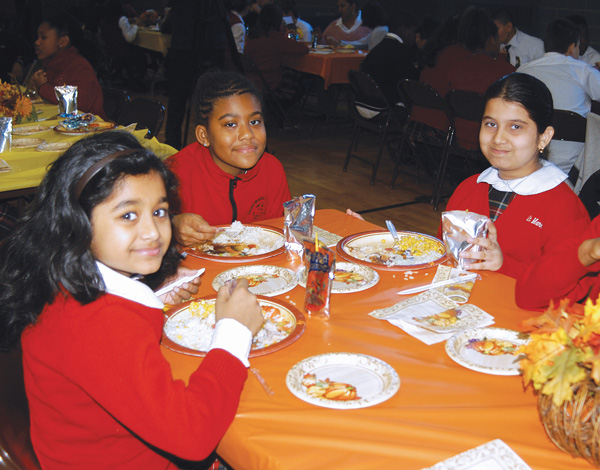 “We teach them it’s an American custom,” Donnelly said, explaining that the meal follows classroom lessons about the first Thanksgiving. Younger students even attended the dinner dressed as pilgrims and Native Americans with paper hats, headdresses and jackets.

“It’s a way for all of us, no matter who we are, to give thanks for what we have,” she added.

Fourth grader Anaya Qayyun said Thanksgiving is not a custom in her home so she delighted in the sights, sounds and smells filling the school auditorium.