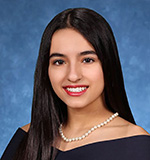 PARISH: Our Lady of the Blessed Sacrament

STANDOUT MOMENT: In junior year, Sarah began a chapter of Operation Smile at St. Agnes. She was able to rally students and faculty to raise enough money for three surgeries for children in 2014 and four surgeries in 2015. She also attended an Operation Smile student leadership conference in Ireland in the summer of 2014