The Most Reverend Ignatius A. Catanello, Titular Bishop of Deultum and Retired Auxiliary Bishop of the Diocese of Brooklyn, died after a lengthy illness on Monday, March 11, 2013. 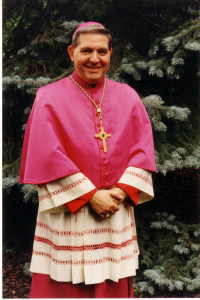 Bishop Catanello lived and served in the Diocese of Brooklyn his entire life. The son of the late Nicholas and the late Mary (DeFalco) Catanello and the brother of Deacon Joseph Catanello, he wasborn on July 23, 1938. He was a parishioner at Most Holy Trinity parish, Williamsburg, where he attended the parish elementary and high school. He studied for one year at the seminary of the Order of Recollects of St. Augustine in Kansas City, Kansas, and then spent three years at Cathedral College, Brooklyn.

In June 1988, he was named an Episcopal Vicar for Queens South with residence at Holy Family rectory, Flushing. He was named Prelate of Honor to His Holiness by Pope John Paul II in 1989. From 1991 to 1994, he was principal-rector of Cathedral Prep Seminary, Elmhurst.

St. John’s University honored him twice, with its President’s Medal in 1975 and an honorary doctorate of law in 1989.

Bishop Catanello was ordained an auxiliary bishop for the Diocese of Brooklyn on Aug. 22, 1994, at Our Lady of Perpetual Help Basilica, Sunset Park, by Bishop Thomas V. Daily. Principal co-consecrators were Auxiliary Bishops Joseph M. Sullivan and Rene A. Valero.

His appointment as bishop came along with that of former Auxiliary Bishop Gerald M. Barbarito, who now serves as bishop ofPalm Beach, Fla. Bishop DiMarzio will serve as main celebrant of the Funeral Mass; Bishop Barbarito will serve as homilist.

As an auxiliary bishop, he served as Vicar for Clergy and Vicar for Consecrated Life and Apostolic Organizations.

Other pastoral work in which he was involved included parish and ecumenical ministry, drug rehabilitation counseling andleadership in clergy associations. He spent nearly a decade as chairman of the diocesan Ecumenical and Interreligious Commission and was president of the Priests Senate.

Pope Benedict XVI accepted the retirement of Bishop Catanello in September 2010. Bishop Catanello, who was 72 at the time, requested retirement for reasons of health. Normally, bishops offer their resignations at the age of 75. The resignation also applied to his role as pastor of Holy Family parish, Flushing, where he had served as pastor since January 2007.

Bishop Catanello’s coat of arms bore the motto “Regnum Dei Intra Vos” (“The Kingdom of God Is Among You”) from Luke’s Gospel 17:21. The background of the shield on the coat of arms is blue to honor the Blessed Mother. On the field is a silver chain that forms a cross. The chain is a play on the bishop’s surname (Cant), which is a variant on the Italian words for “little chain.”

In the quadrants of the shield are symbols of great significance to the bishop. In the first quarter (upper left) is a gold chalice with a silver host, the traditional symbol of the Holy Eucharist used to symbolize the central character of the priesthood. In the upper right is a silver Byzantine cross to signify the fact that Bishop Catanello, by special permission because of a special chaplaincy that he held, is bi-ritual in the Roman and Byzantine/Ukrainian Rites of the Catholic Church.

In the lower left is an open silver book with gold edges and charged with a black Chi-Rho (XP), two Greek letters used tosymbolize Christ, to represent the years teaching theology at St. John’s University. In the lower right is a fleur-de-lis taken from the coat of arms of the Diocese of Brooklyn’s retired Bishop Thomas V. Daily to honor Mary, the Blessed Mother and baptismal patroness of the bishop’s mother.
Arrangements are as follows: