Hundreds gathered in Elmhurst last weekend to be among the first to see, touch and venerate a first-class relic of St. John Paul II, which has taken up permanent residence at St. Adalbert Church. 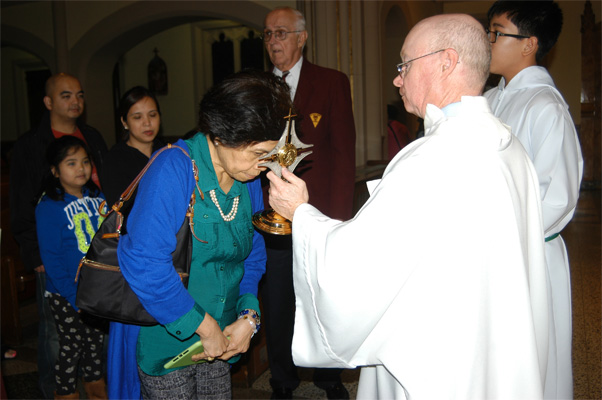 The parish, administered by the Conventual Franciscan Friars, celebrated its reception of the relic by presenting it for public exposition and veneration following five weekend Masses in English and Polish in anticipation of St. John Paul’s Oct. 22 feast day.

“We all know his life. We could see how he was becoming a saint. Now he comes to us – this parish – and we thank God for this privilege.”

Encased in a golden reliquary, the relic consists of several strands of the late pontiff’s silvery white hair and was designated for the parish by Archbishop Mieczyslaw Mokrzycki, who was John Paul’s personal secretary, at the request of Father Stanislaw Czerwonka, O.F.M. Conv., St. Adalbert’s parochial vicar.

The relic arrived from Poland one month ago and has been in the parish friary for private veneration. Last Saturday, it was carried in procession at the evening Masses and placed to the right of the altar with a banner of the late pontiff’s likeness.

As parishioners and guests arrived, lector Joe Sabo welcomed the multicultural crowd and shared his joy in the extraordinary opportunity for the parish to receive a relic of the late Polish pope, whom he called “our intercessor and brother in faith.”

He described John Paul as a “saint whom we knew and who taught us how to follow the steps of Jesus, open doors for Christ, build bridges between people, embrace the cross of suffering and proclaim the Gospel of Life to the people of our time.”

‘Spoke as a Prophet’

The late pope’s legacy was the subject of Father Milunski’s homily in which he noted that John Paul “spoke as a prophet” on the world stage.

When he spoke, people listened and his words and ideas took root, Father Milunski noted, making reference to theology of the body and the culture of life.

In the eyes of the parish, having a relic of John Paul permanently available for veneration is a precious gift from God.

According to Father Podymniak, the relic will be available for daily veneration in the lower church from 6 a.m. to 4:30 p.m.

“People may come every day,” he said. “We want everybody to come and see it and touch it.” He hopes it will be a constant reminder to “follow in the footsteps of John Paul II.”

“We are so lucky here,” said Evelyn Ibarreta, who was one of the first to kiss the reliquary following Mass. “I feel like I want to cry.”

Ibarreta is a cancer survivor and says she prayed to John Paul when she was battling the disease. To have him present at her parish was overwhelming for her.

“It’s beautiful. It (relic) looks like white hair in the shape of a star,” said Victor DeSanto, who came from Resurrection Ascension, Rego Park, to see the relic.

Seven members of the Our Lady of Guadalupe Youth Group at St. Gerard Majella parish, Hollis, came to see the relic at the suggestion of their pastor, Father Josephjude Gannon.

“We understood how difficult his (St. John Paul) journey was to Christ,” said youth group member Jilenny Duran. She was impressed that John Paul, despite facing many obstacles in his youth, still followed his call to Christ.

“He’s an example to us to always find Christ,” added Vanessa Exil, another youth group member. “Through hard times, he always found Christ.”

Parishioner Marian Zabor feels the relic will bring a “very special holiness” to the parish and anyone who stops in to “meet” the pope. “This is something to boost people and bring people together.”

Yguaniona Furment, a parishioner from Resurrection-Ascension, read about the relic’s arrival in The Tablet and said she had to attend.

When asked why, she explained, “Because he’s John Paul II. He changed the world, and he changed my life.

“With all of the mistakes I’ve made, I get very scared. He says ‘Don’t be afraid. God is here,’ and it makes me feel like there is hope.”

On that evening, she attended both Masses and spent the intervening hour in prayer.

“The best thing I can do is pray the rosary, and I give this rosary for him (St. John Paul),” she said.

Having the relic at the parish, he said, “means a lot to the community. The meaning is even more pronounced because it’s a Polish parish.”

As for bringing petitions before the saint, Sexton said, “To ask something of him would be difficult because he gave so much of himself in his life. For me, the relic will be a reminder to pray and live as he did.”