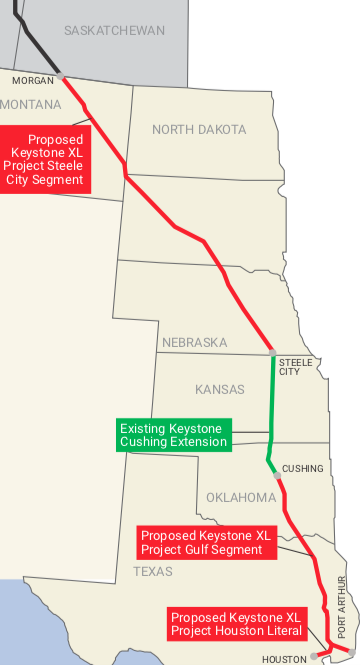 WINDSOR TERRACE — Catholic environmental advocates applauded President Joe Biden’s decision to revoke the Keystone XL pipeline permit as a positive step towards a greener economy, but question if the decision was short-sighted with no job alternatives in place.

“I’m always concerned every time people are losing jobs. It’s not humane to close things down and leave people unemployed,” said Angélica Gonzalez Apple, the Global Catholic Climate Movement North America program manager. “It’s an important point to talk about where we need to address just transition. As we’re moving the country and world into cleaner energy we need to make more of a commitment when these things happen that we can ensure people’s jobs.”

Biden revoked the permit for the project in an executive order last week. He cited a 2015 review from the Department of State that determined the pipeline wasn’t in the national interest. And that it undercuts the country’s “credibility and influence” when urging other countries to take climate action.

The Keystone XL pipeline is a 1,200-mile pipeline that would deliver crude oil from the tar sands in Alberta, Canada to Nebraska. First proposed in 2008 by what is now TC Energy, the $8 billion pipeline would deliver over 800,000 barrels of oil a day.

The project has been a source of tension between economists and climate change advocates for years. The Obama administration rejected it before President Donald Trump greenlit construction to continue through executive action. In a statement ahead of Biden’s announcement, TC Energy said the action would “directly lead to the layoff of thousands of union workers and negatively impact ground-breaking industry commitments to use renewable energy.” The company had announced days earlier that the pipeline would operate at a net-zero emissions level when placed in service in 2023.

Apple, however, noted the pipeline’s operation isn’t the only concern. She said mining from the tar sands – where the oil would come from — is also costly to the environment.

“It’s very wasteful because when you mine for it, it not only pollutes water sources but what’s left behind has to be stored in toxic storage ponds,”  she said. “You’re mining, then you have to do something with the wastewater that becomes toxic.”

Eric LeCompte, executive director of Jubilee USA Network — an interfaith network of religious and advocacy groups — called Biden’s decision “a step in the right direction to lessen our need on fossil fuels and start the move towards a greener economy.”

LeCompte acknowledged this was an expected move Biden had promised but hopes there will be more prudence from the administration in the future.

“We have to move forward with the decisions that are win-win decisions that look at both workers and the economy as well as climate issues,” he said.

There are conflicting reports about the jobs lost from the executive action. Reports indicate that at least 1,000 jobs were eliminated immediately. The Global Energy Institute, part of the U.S. Chamber of Commerce, said in a statement that the project supports over 13,000 Canadian and American workers. The potential economic blow was the focus of leaders from the states — Montana, Nebraska, and South Dakota — hardest hit.

“Failure to construct the pipeline would mean more dependence on overseas energy sources as well as fewer jobs and less property tax relief for Nebraskans,” Governor Pete Ricketts said in a statement.

“This project will create thousands of jobs, generate tax revenue for local communities, promote North American energy security and independence, and it is the safest and most environmentally friendly way to transport oil,” Daines said.

Prime Minister of Canada Justin Trudeau told Biden he was “disappointed” with the decision in a phone call last week.

With the decision made, LeCompte said it would be “incumbent upon the Biden Administration to move forward on new green jobs sooner rather than later” to offset the job losses of the transition to a greener economy.

“What needs to happen, and this is beyond just the pipeline issue, but it’s about delivery to workers in the new stimulus package. That’s where these workers can see real extended relief,” LeCompte said.

In addition, Apple wants the president to recognize that many workers on projects like the Keystone XL pipeline come from poor or marginalized communities, so the opportunity to transition and dialogue between the parties is vital.

“The environmental world, as well as the unions, need to work together and collaborate so they can come up with a solution for this transition so it’s equitable for all,” she said.

“There needs to be more space for dialogue than maybe abrupt decisions that make people feel we’re very polarized. With the transition of power, I think that this administration really needs to make an effort to communicate well.”