Bashert is a Yiddish word that means “destiny” – and that is how a Brooklyn state senator explains the connection made between his office, a Queens parish and school children in Ghana.

Husband-and-wife parishioners John and Noemi Fitzgerald visited the senator’s Midwood office to meet him and his staff, and collect the backpacks, which also had notebooks, pencils and pocket-size packages of tissues tucked inside.

“I don’t believe that anything happens by accident,” said Sen. Felder, a Democrat whose district spans Brooklyn’s midsection, from Flatbush to Sunset Park. “This project is a gift from heaven. That’s all I can say.” 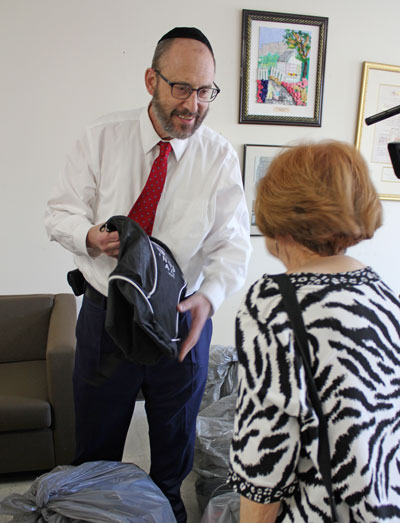 “I was so happy” to see the backpacks, said Father Aguzey. “The children will cherish them so much.”

Father Aguzey comes from the Diocese of Techiman in Ghana, where he said, “some people are very underprivileged.”

Last Easter, he returned home for a visit and brought the children 3,000 notebooks and pencils, donated by St. Joan of Arc parishioners. “The children were so happy,” he said.

After distributing the books, a 9-year-old boy approached him and said, “Father, thank you so much for the books. Do you think you could send some used backpacks?”

In his hometown, he said, “schoolchildren carry pencils and books in their hands. This is how they’ve learned to live their lives. I know it firsthand.”

He estimates that there are more than 10,000 schoolchildren under age 18 in his diocese, and some walk two miles back and forth to school every day.

For these children, just as it was for himself, education is the key to a better future.

“Drops of water make an ocean,” the priest said. “A backpack can’t solve all of the problems, but surely, it will help.”

Moved by the child’s request, he asked for assistance from his parish family. Noemi Fitzgerald, parish religious education director, took up the cause.

When she announced registration dates for fall faith formation classes, she also told families they could drop off their used bookbags for children from Father Aguzey’s hometown in Ghana.

“It started taking off,” said Noemi, who estimates that she has already received about 100 bags.

“We asked for old ones (backpacks) in good condition, but many people have brought new ones,” she said.

Her husband John had the idea to reach out to elected officials as well. He mailed letters to every legislator in Brooklyn and Queens requesting one backpack, and immediately heard from Sen. Felder’s office.

The senator and his staff had just been discussing what to do with several dozen backpacks they had in storage. The senator wanted them go to children who would put them to good use.

“We live in the United States, the most wonderful country in the world, and we sometimes take for granted the abundance of food and supplies and things that we have. We can’t even fathom or understand someone else needing a pencil or a backpack,” the senator said.

“For us to be able to take resources that are here and send them to some wonderful children who need them, there’s nothing better.”

Father Aguzey will continue to collect backpacks through the summer. Donations may be brought to the parish rectory.