My school, Cristo Rey Brooklyn H.S. in Bushwick, has a work-study program, which allows me to work one day each school week to help pay my tuition. I have been working at the DeSales Media Group, which produces NET-TV and The Tablet, for almost three years.

DeSales recently offered me a once in a lifetime opportunity to attend the Alfred E. Smith Memorial Foundation Dinner held every year at the Waldorf-Astoria Hotel located in Manhattan. This event supports charities in the Archdicoese of New York. This year, President Barack Obama and Gov. Mitt Romney attended the dinner dressed in white tie and were the main speakers. This event made them put aside their differences for charity and attend the dinner in good spirit. 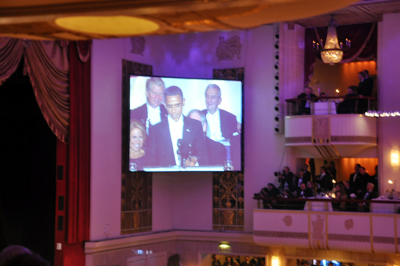 My expectations were the complete opposite of what actually took place. I was thankful. I was expecting a boring war battle filled with speeches between the two men. However, I was wrong. President Obama and Gov. Romney were the total opposite. The air was filled with laughter, comic relief and no tension whatsoever. It was very delightful that I had such a wonderful opportunity to attend this event.

The night started with a meet-and-greet cocktail hour, then we transferred into the main ballroom. Candles were lit at every table, and fresh white roses sat at the center of each table to give it an elegant feel. President Obama and Gov. Romney told lighthearted jokes, which were the priceless highlight of that evening.

Can you imagine me, a 17-year-old high school senior, attending this? People say that I seemed calm, but I was extremely nervous. My hands were ice cold and shaking a bit – just to be present in that room, knowing that the people standing next to me have accomplished so much and that I can also accomplish the same or even more. That gives me encouragement, hope and inspiration for my future and what it holds for me.

Although I was extremely nervous and shaking in my shoes to be in the same room as the President of the United States, his warm, welcoming smile had a calming effect on me. At one point, I was standing only about five feet away from the president and Gov. Romney. I took lots of pictures of them. My heart filled with glee and excitement.

It was a night that I will never forget and a memory I will share with my family and friends. That evening is one of the best things that has ever happened to me, thanks to Msgr. Kieran Harrington, the vicar for communications of the diocese, and the DeSales Media Group.

One thought on “President Obama Was Only Five Feet Away”