PROSPECT HEIGHTS — Polio, a debilitating and sometimes fatal disease primarily eradicated in the U.S., has struck New York, prompting the governor to announce a 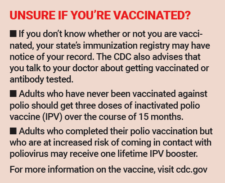 Gov. Kathy Hochul declared the disaster via an executive order issued Friday, Sept. 9. One adult tested positive for polio in July in Rockland County, the first case in nearly a decade.

The executive order immediately expands the network of polio vaccine administrators to include EMS workers, midwives, and pharmacists to ramp up vaccinations across the state.

One might ask, why such a heightened response if only one person has so far tested positive for polio? Officials noted that tests of wastewater in Rockland, Orange, Sullivan Counties, and New York City detected the presence of the poliovirus. Nassau County was added to that list on Sept. 9.

“Officials estimate that for every one case of paralytic polio observed, there may be hundreds of other people infected,” according to a news release from the State Department of Health.

“On polio, we simply cannot roll the dice,” Dr. Bassett said. “If you or your child are unvaccinated or not up to date with vaccinations, the risk of paralytic disease is real. I urge New Yorkers to not accept any risk at all.”

Dr. Bassett said polio immunization is “safe and effective – protecting nearly all people against disease who receive the recommended doses. Do not wait to vaccinate.”

About 75 years ago, the word “polio” caused dread, much like the modern viral diseases HIV-AIDS or COVID-19.

The contagious illness disabled thousands of children and adults, many with deformed limbs. Some people also suffered from paralysis so severe, it robbed them of their mobility or the ability to breathe. Many were kept alive via “iron lung” ventilators; but others died.

However, polio — called poliomyelitis in medical textbooks — was all but eradicated in the U.S. by the end of the 1970s. Public health historians credit an aggressive vaccination campaign.

A few cases of polio surfaced since then, with the last one being nearly a decade ago. Still, the disease reemerged this summer, and close to home.

The patient in Rockland County, a young man, suffered some paralysis, officials said.

“One New Yorker paralyzed by polio is already too many,” Bassett said. “Polio in New York today is an imminent threat to all adults and children who are unvaccinated or not up to date with their polio immunizations.”

While a major outbreak has yet to follow, public health officials intend to get more people vaccinated and schedule follow-up boosters.

There is no cure for polio, but with such a successful vaccination campaign spanning decades, one can reasonably ask why the disease returned to New York.

Dr. Robert Tiballi, an infectious disease physician from the Chicago area and a member of the Catholic Medical Association, said similar cases have appeared in London and Paris; all are connected to an oral anti-polio vaccine made from a weakened strain of poliovirus.

That particular vaccine hasn’t been used in the U.S. for a couple of decades, but it is used in other parts of the world.

“When you give it to somebody, they get a low-level infection in their gut,” Dr. Tiballi said.

Next, the virus is “shed” into wastewater. Of course, no one willingly drinks sewage, but it has been known to infiltrate drinking water.

And, if someone with the virus does not completely wash their hands after using the restroom and then prepares food, an unvaccinated person could be infected, Dr. Tiballi said.

He added that the only way the virus could have reached the U.S. is via a “carrier” who traveled or immigrated from a nation that still uses the oral vaccine.

Dr. Tiballi, who is a native of New York’s Finger Lakes region, recalls stories his mother told about polio — that entire towns shut down if only one child got the disease. But no such stories were told in recent years. That’s why the recent New York case was so startling.

Dr. Tiballi said he did not believe “anti-vax” sentiments during the COVID-19 pandemic caused any backlash for polio vaccinations. He did, however, express concern that the lockdowns may have delayed vaccinations for some people.

“This could turn into a bigger problem than it is now,” Dr. Tiballi said. “But it’s probably not going to be a widespread, explosive issue like it was when my mother was growing up.”

Dr. Tiballi said of people who have been vaccinated with the injectable vaccine, which is the standard in the U.S., “You’d be protected.”

But, he noted, boosters are recommended every 10 to 15 years.

A Tough Sell for Some

Dr. Bassett issued a call to action for “every New Yorker, parent, guardian, and pediatrician.” Their mission, she said, is to do “everything possible to ensure they, their children, and their patients are protected from this dangerous, debilitating disease.”

The strategy: “safe and effective vaccination.”

That can be a tough sell to some communities. Haredi Orthodox Jews with ancestors who perished in the Holocaust are known to be leery of government-promoted vaccines.

The CDC referred to New York health records that showed the ZIP code where the patient lives has only a 37% rate of vaccinations against polio for children age 2 and younger, compared to the national average, same age group, of nearly 93%.

“Low vaccination coverage in the patient’s county of residence indicates that the community is at risk for additional cases of paralytic polio,” the CDC said. “Even a single case of paralytic polio represents a public health emergency.”

In July, local media reported that the infected person belonged to that faith. The man’s identity was not published, but representatives of the community have said they fear the attention could inflame the ongoing anti-Semitic hate crimes throughout the Hudson Valley and as far away as Brooklyn.

The United Jewish Organizations (UJO) of Williamsburg and North Brooklyn subsequently met with health officials. In a news blog, the group shared the concerns expressed by the officials.

“The fact that there is already such a severe case is an indication that there are likely many more undiagnosed infections,” the UJO reported.

The group added that health officials say, “Those who are late with vaccination should make sure to follow the recommended vaccination catch-up schedule as soon as possible.”