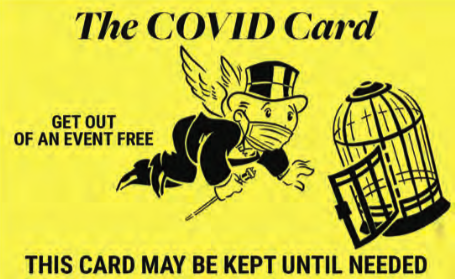 WHITE PLAINS — We’ve seen the headlines for more than a year now — “Impact of coronavirus lockdowns on mental health;” “Is the US ready for the mental health crisis that will follow?;” “Kids are not okay” — and the studies are countless. But what about the subset of the population that actually likes the separation?

“The pandemic is the best thing that’s ever happened for my mental health,” said Erica Mercorella, a woman from The Bronx who has suffered from social anxieties most of her adult life. The coronavirus crisis has lessened her own hardships, in that the pressure of having to interact with others is gone.

She’s not the only one. Anne Marie Rossi, a resident of Scarsdale, N.Y., can relate. “I’ve always felt that if I didn’t have any weekend plans, that I was missing out. I was constantly on go-go-go mode. My calendar was always filled. Now I don’t feel guilty anymore when I have no plans.”

But what about the people who are taking advantage of the crisis, perhaps using it as an excuse to avoid anything they really don’t want to go to? There’s a growing number of people declining to participate in any sort of gathering, Mass included, “because of COVID,” when in reality, they just don’t want to be bothered. Those people are playing what’s now being called the “COVID card,” and it should be used with caution, as the consequences can be serious.

“Apart from lying, it is damaging to participate in ‘playing the COVID card’ because it reinforces the human tendency to make excuses for our actions or inactions,” explained Father Christopher Heanue, the administrator of the Holy Child Jesus-Saint Benedict Joseph Labre parish, Richmond Hill. “Being truthful with others is as important as being truthful with ourselves. And recognizing our intentions is an important part in examining our own consciences.”

He even revealed that some of his parishioners play the COVID card when it comes to their faith.

“I’ve met at local grocery stores and pharmacies some of my parishioners that I have not yet seen return to Mass. One which told me apologetically, ‘Father, I just don’t feel comfortable going out yet’ … as we were in the produce aisle!”

Luciana Iannelli, who lives in Purchase, N.Y., is experiencing this right now with other parents.

“Some moms won’t do the carpool anymore because they don’t want the germs of other people’s kids in their car,” the mother of two said. “But what about the germs in my car when I have to pick their kids up? Or when their kids come over to my house to play. What’s the difference?”

Judith Herrera, a mother from Manhattan, claims her daughter hasn’t seen her best friend in almost a year — all because the parents play their hand at the game.

“They won’t let their kid come over for a playdate, but yet they’ll take the subway and go out to eat at restaurants. I don’t understand the logic,” she said.

The double standard is everywhere. Sure, many people are legitimately taking every precaution recommended by the Centers for Disease Control. However, there are also many people who are using the virus as a convenient excuse to get out of obligations, even moral ones.

“There’s obviously two sides to the coin,” explains Father Heanue, who has counseled countless parishioners negatively affected by the pandemic, whose anxiety levels are going through the roof and are seriously hurting. “There are those who are legitimately afraid of contracting the coronavirus and have stopped all public activities … and others who, as they say, ‘never let a good crisis go to waste.’ ”

Wakes, in particular, have been extremely small this past year. It makes one wonder, are there any more people in a funeral parlor, or at a funeral Mass, than there are at your local grocery store? Probably not.

Mercorella admits to using the COVID card herself. “It’s just easier to blame it on COVID than to hurt someone’s feelings by saying I don’t want to come.”

Now that the country is crawling back to a hint of normalcy — President Biden just announced that the United States would have enough vaccines for all American adults by the end of May — the big question is: How much longer will the COVID card be used and accepted?

Dr. Anthony Mancini, a Clinical Psychologist and Associate Professor at Pace University, says there’s no definitive answer as to when these social patterns will end, but once restrictions relax and people are outside more and going to restaurants more frequently, it can reverse pretty rapidly.

“The COVID excuse is convenient because it can be understood from more than one point of view,” Mancini said. “There’s more than one thing going on — it’s become a kind of learned avoidance of the outside world accompanied with not wanting to do something and the reduced incentive of interacting.

“Right now, people aren’t getting that reward of going outside, so there’s a reduced incentive.”

To put it simply: Once the weather clears up, there’s less room for excuses. Dr. Mancini also acknowledged that while some people are using the pandemic as a strategic way to get out of something, other people are just being honest.

“Some people are legitimately avoiding going out because of an abundance of caution and phobia,” he said. “And that’s OK.”