In the late 1960s when many religious sisters reclaimed their baptismal and family names, Sister Mary Marcellus, C.S.J., became Sister Mary Anne Ricioppo, C.S.J. Curiously, the name didn’t stick. It was one of those funny things in a time of whirlwind change that she continued on as Marcellus in spite of the formal switch. In Spanish, it was Marcella. Her sisters called her Marce. 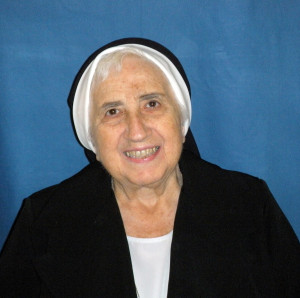 Sister Marcellus, who died on Nov. 11, 2012, was one of God’s little ones. Her friendship with Jesus was such that she radiated Gospel simplicity everywhere she went and had no other agenda but that friendship. If you knew her, you knew you had an open invitation to a fiesta of prayer, laughter, music, teaching and community which made the Lord’s presence believable, visible. A brilliant teacher and devoted principal for over half a century, her kids were drawn by her holiness without realizing that holiness was what attracted them. She’d have preferred death to seeing harm come to any one of them.

Activity-packed days and evenings and many weekends were possible because of the stability of a Eucharistic center. Daily Mass with her parish community at Transfiguration Church, Williamsburg, and a daily hour of Eucharistic adoration with Sister Peggy Walsh, C.S.J., in their tiny convent chapel allowed life and service to roll along evenly, smoothly, for the most part. That hour of adoration ballooned into an entire month each summer, an extended time of prayer and hospitality for those who wanted to join sisters in prayer and quiet at the parish retreat house in Westchester County. A few weeks before, there would be the usual phone call to make sure I’d be there for a few days at least, for Mass, a meal and good conversation.

On a pilgrimage to Rome for the beatification of Charles de Foucauld in November of 2005, her joy was childlike. When Pope Benedict unexpectedly walked by at St. Peter’s Basilica about 10 feet away from us, the moment was received as a surprise gift. Delighted as she was to be in the Eternal City, Sister Marcellus knew where she belonged, knew who she was. She was a sister, a little sister spiritually, a sister to her good friends, young and old, back home in Brooklyn. She was Jesus’ little sister most of all.

Of course, there were stormy days too, and she could ask, as any of us could, “What’s this all about?” “What in the world are we doing here?” The good answer, God’s answer, always came, and she never, ever gave up.

An honest, faithful attempt at establishing a new expression of consecrated life, together with Sister Peggy and two other Sisters of St. Joseph, toward living the Nazareth life more fully brought her full circle to carry on with the life she was already living. Mysteriously guided by Abba Joseph, husband of Mary and protector of Josephite Sisters, and Blessed Charles for sure, there was now a new emphasis on the little way, the spirituality of littleness. This renewed commitment would play out in contemplative prayer and in hospitality shared with immigrant women recently arrived from Central America with no resources, in addition to her usual work in school and parish.

When her school closed, she knew the quality of education was going down the rabbit hole, so she had no trouble letting go. Sister Marcellus was in on one of our best kept secrets: You don’t necessarily need a school or a classroom to teach. “Where two or three are gathered in my name. . .” was personal good news for her. Right to the end, the people of once-abandoned Williamsburg kept on coming to her choir, her CCD program, her prayer, her caritas.

In her final illness, I spoke with her on the phone and told her I was sorry I couldn’t be around more. Kind and gracious as ever, as if nothing were amiss, she assured me that it was ok. “It’s just good to hear your voice,” she said. A couple of days before she went home to the Lord, I sat next to her bed in the convent, held her hand and prayed the Memorare aloud. Unable to speak and very weak, a quick squeeze of my hand was her grateful “Amen,” a final gesture of a consecrated woman whose life was eucharistic, always thankful, always giving, always in communion, joyful and very much hidden from a world utterly incapable of offering more.

Her wake, a 24-hour vigil, was held in the parish church. Former second graders came with their grandchildren. The pastor wept as he presided at her funeral liturgy. It was hard to believe we had been friends for 40 years.

One thought on “People Were Attracted to Sister Marce’s Holiness”