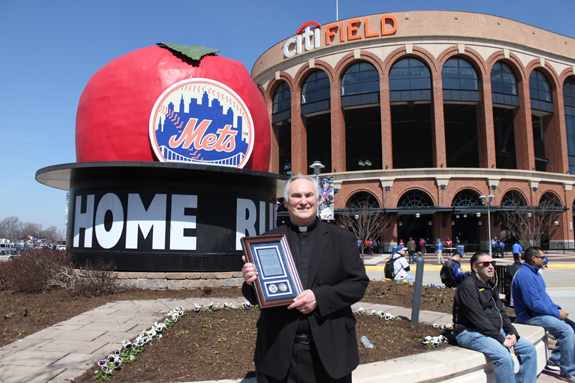 Msgr. John Brown, pastor of St. Thomas Aquinas, Flatlands, was awarded the 2013 Department of Homeland Security Rick Rescorla National Award for Resilience on April 3 at Citi Field, Flushing, for his tireless efforts in the immediate aftermath of Hurricane Sandy. Msgr. Brown helped coordinate the relief center established in the schoolyard of the parish where he was formerly pastor, St. Francis de Sales, Belle Harbor. Under his leadership, the parish became the largest relief center on the Rockaway peninsula, serving between 4,000 and 10,000 people each day. The New York Mets and Walgreens drugstores also received the award, which is named in the memory of Rick Rescorla, who on Sept. 11, 2001 led a massive evacuation of Morgan Stanley’s 2,700-person workforce located in the South Tower, saving the lives of all but six.