When James O’Callahan retired from teaching, he decided he wanted to spend his time trying to help the people of Haiti.

Having a background in human rights work, he knew the history of political repression, economic instability and staggering poverty endured by the largely Catholic island nation. And he wanted to motivate people in Brooklyn – home to one of the largest Haitian populations in the U.S. – to learn about the many needs facing Haiti today, and become invested in helping the people improve their lives.

That was in 2007, and today, the Haiti Support Group that O’Callahan and others founded at St. Augustine parish in Park Slope, has not only supported activities to address conditions of poverty in Haiti, but also formed a bridge between parishioners at St. Augustine and at St. Andre Church in Dufort.

Dufort is located in the port town of Leogane, near the epicenter of the January 2010 earthquake that left tens of thousands dead and homeless, and turned buildings to rubble, including the church of St. Andre.

The two parishes formed a twinning partnership seven years ago and have developed a close bond, based in respect and love, which continues to grow through visits, letters and prayers for each other at every Sunday liturgy. The Brooklyn parish donates several thousand dollars to its brothers and sisters at St. Andre every year. 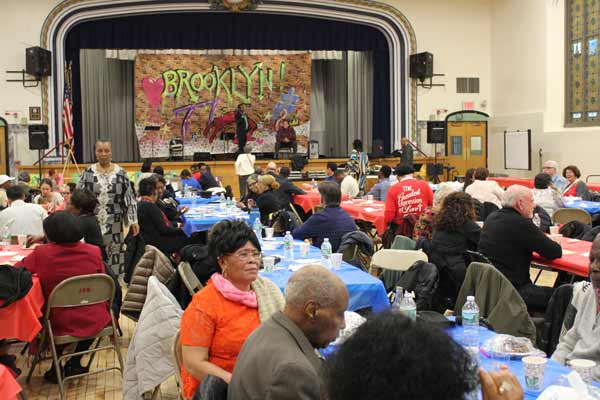 More than 200 people from the English-, Spanish- and Creole-speaking communities at St. Augustine turned out to enjoy an evening of Haitian music, dancing and food, including curried chicken with black rice Djon Djon.

‘One Body in Christ’

The event honored Father Thomas Ahern, former pastor, who encouraged the Haiti Support Group and twinning endeavor during his tenure, and even accompanied parishioners on an eye-opening trip to Dufort.

“Parishes struggle here in Brooklyn, but it is nothing in comparison to what’s going on in other places,” said Father Ahern.

“It’s been a wonderful experience to be in relationship with this parish (St. Andre), with its pastor, its people. It’s not just a relationship of material benefit. We try to raise money, but we also try to foster an educational and spiritual component to the relationship. … We’re one church, one body in Christ.”

Haitian roots and ministry run deep at St. Augustine parish, which opened its doors to the Holy Ghost Fathers who were expelled by Haitian President Francois “Papa Doc” Duvalier in the 1960s. It became the spiritual home of many Haitian immigrants who fled their homeland during Duvalier’s regime.

Educating parishioners about Haiti’s history, culture, people and current needs is one of the aims of the Haiti Support Group. Members seek to raise funds for the island nation to promote sustainable improvement in the areas of health, education and overall welfare.

“Our primary focus right now is the parish of St. Andre,” noted O’Callahan.

He connected with the parish and its former pastor, Father Maurice Blot, in 2012 as they were starting the slow process of reorganizing and rebuilding in the wake of the 2010 quake.

“Everything (that has been) accomplished has been for love of God so that pushes you forward,” said Father Presume. “Rebuilding the church and school are the biggest concerns for the moment because conditions are not good.”

Masses are currently celebrated in a temporary church made of plywood with a tin roof, and around 120 local children attend classes in the parish school, which has no electricity or bathrooms. Students receive educational and school supplies, as well as a hot meal every day, because of the funds raised by the Haiti Support Group.

A delegation of Brooklyn parishioners also travels to Haiti each year to foster a deeper connection with people there. Group members get to better understand the needs of the Haitian people and feel more invested in the partnership because they see the difference their contributions are making.

“Being down there and meeting the people – the hospitality, the kindness of the people – is absolutely wonderful,” said Jean Prahl, one of the original members of the Haiti Support Group, who has made several trips to Haiti, most recently in February of this year.

Though they have to speak through translators, she said the “people are very welcoming and you can see the exuberance, the energy in the culture of the country.”

Being part of the group, Prahl said, has enabled her to develop a whole new appreciation, not just for the island nation, but also its people – what they’ve gone through and why. “It’s been a personally enriching experience,” she said.

While there are frustrations, like funding a well that later dried up, O’Callahan and other group members believe that the good that has come from this ongoing effort is the greatest reward. 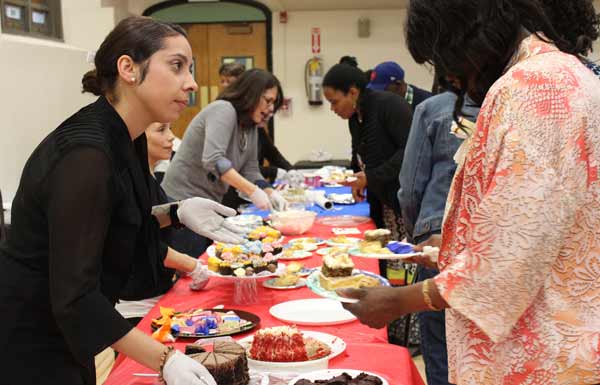 Three years ago, the effort expanded further into Park Slope when Father Presume was invited to visit St. Francis Xavier Catholic Academy, where he met Dorothy Taylor, principal, along with teachers and students.

Learning about the challenges faced by school children at Father Presume’s parish, St. Francis students responded by hosting bake sale and dress down day fundraisers to benefit St. Andre’s school. Students have also started a pen pal exchange with their peers in Haiti.

In addition to St. Augustine’s potluck social and raffle to benefit St. Andre, several parishioners also donate $40 per month to sponsor the salary of teachers at the parish school.

Haitian-born Carnela Dimanche, who moved to Park Slope as a child in the 1970s, is proud to see her home parish support her homeland. And she does her part as well – donating her time to serve food and clean up after the potluck social.

Outreach to Haiti (outreachtohaiti.org/programs/twinning) is the twinning umbrella of the Diocese of Norwich, Conn. Several U.S. dioceses (including Norwich, Conn.; Richmond, Va.; Worchester, Mass.) that have a twinning relationship with multiple parishes in Haiti.

Matthew 25 (www.parishprogram.org/matthew-25-house/) is a house of hospitality primarily for groups from twinned parishes to stay short term in Port-au-Prince while they are waiting to be picked up by someone from their sister parish, or at the end of their visit, to stay while waiting to fly back to the U.S. It is run by the Parish Twinning Program of the Americas.