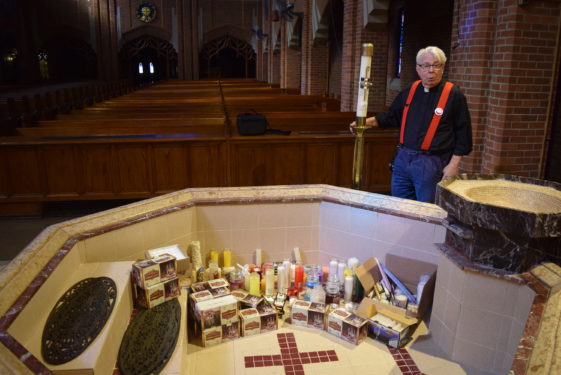 Our Lady of Refuge, Flatbush, is hoping to be a light in the midst of darkness as it collects candles to send to devastated areas of Puerto Rico.

Father Michael Perry, pastor, says the parish baptismal fount is being used to collect candles and he hopes to entirely fill it. Collections are currently ongoing and will be collected right up until the Oct. 20 diocesan Mass at St. Joseph Co-Cathedral. Donations of candles and lighters are just some of the goods being sought to provide those in need with light until power is restored to the island that was ravaged by Hurricane Maria.

“We are baptized in the faith of the flame and now we are sending the hope of the faith to the people of Puerto Rico,” said Father Perry. “People are living in darkness and the light might be a symbol, but the candle can help so much. Children might be able to read and do their homework and people will be able to take comfort in having light for maybe just a few hours, but hours of light they would not have had otherwise.

“Of course water, food, and clothes are needed, but light is needed as well and it is a symbol of hope. A lot of the candles are half used, or taken right off their mantles, and some are new but people are donating everything they can because they know they are needed.

“When people are baptized they are given a candle and now we can share these with Puerto Rico. We are also collecting lighters so that people will be able to light their candles.

Bishop Nicholas DiMarzio has requested each parish in Brooklyn and Queens to take up a collection of material goods in the next week to ten days. Catholic Charities will bring the donations to its collection center to be packaged and shipped to Puerto Rico.

Father Perry estimates that about one third of the parishioners at Our Lady of Refuge are Spanish-speaking and even though they are made up of people from many different countries everyone is pitching in.

More than half of the U.S. territory of 3.4 million is still without drinking water after Hurricane Maria swept through the island on Sept. 20.

Most of the people are still without power. Hospitals and gas stations have been slow to reopen and provide for the people of the Island. Residents sort through wreckage of their property to try and salvage anything they can find. A Mass to support the Puerto Rican communiy will be held on Friday Oct. 20 at St. Joseph Co-Cathedral at 7 p.m.

In a letter to pastors, Bishop DiMarzio wrote, “In the last week, daily we are witnessing the devastation that Hurricane Maria wrought on the island of Puerto Rico. This has not merely affected the people living in the island itself. Rather, this horrific storm has also impacted many of our sisters and brothers here in our own Diocese in Brooklyn and Queens who have family still living in Puerto Rico and are unable to communicate with them because of the destruction on the island.”