At the 42nd annual March for Life in Washington, D.C., Jan. 22, more than 500 pro-lifers from the Brooklyn Diocese showed their support for all human life and called for an end to abortion. 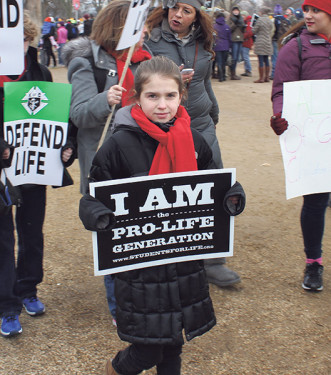 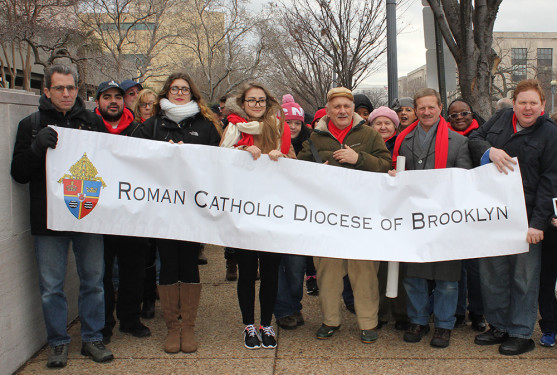 Several delegations from Brooklyn and Queens made the trip to Washington. (Photo by Marie Elena Giossi) 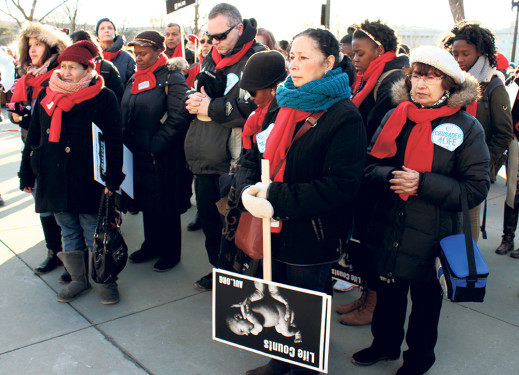 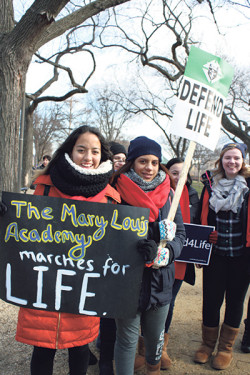 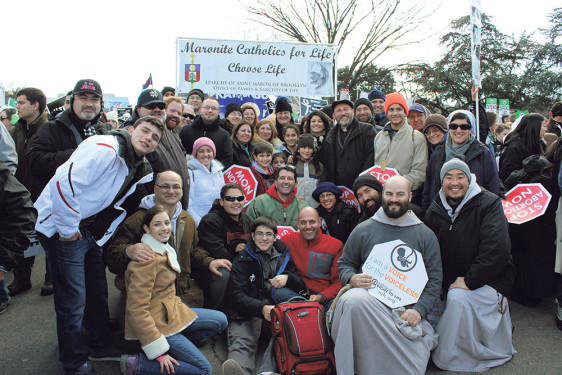 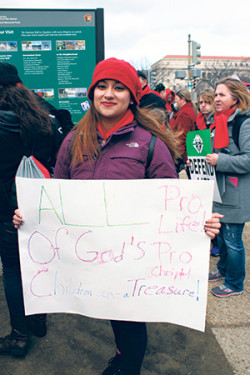 Desiree Colon, 21, a volunteer who administers free pregnancy tests at the Life Center of New York, Bay Ridge, participated in her first March for Life. She hopes legalized abortion will be overturned in the next 20 years. (Photo by Marie Elena Giossi) 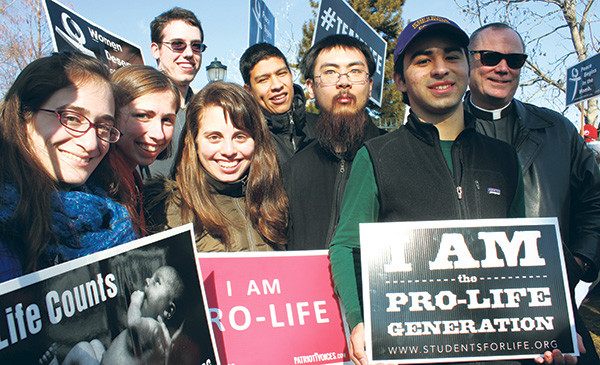 David Vascones, second from right, of Our Lady of Hope parish, Middle Village, was proud to see people from Queens as he marched with the campus ministry team from his school, Williams College, Williamstown, Mass. (Photo by Marie Elena Giossi) 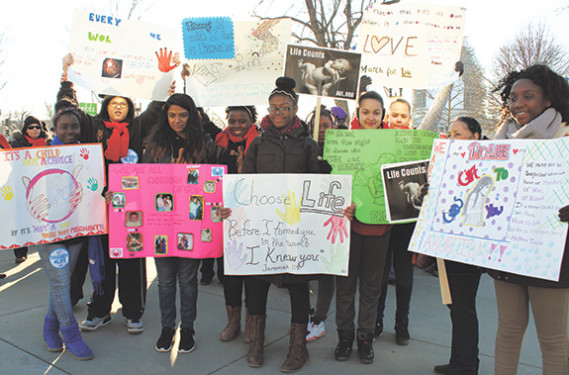 Members of Our Lady of Guadalupe Youth Group from St. Gerard Majella, Hollis, hold up their handmade signs in the country’s capital. Most of these young people are either confirmation candidates or are preparing to go to World Youth Day 2016 in Poland. (Photo by Marie Elena Giossi) 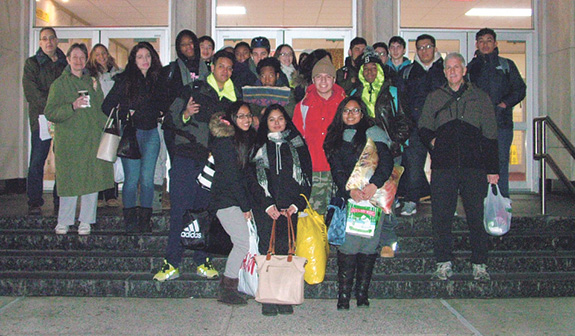 Students from Christ the King R.H.S., Middle Village, meet at their school to embark on a five-hour bus ride to Washington, D.C. (Photo by Marie Elena Giossi) 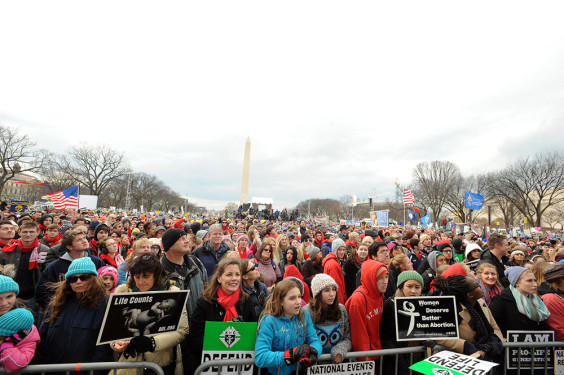 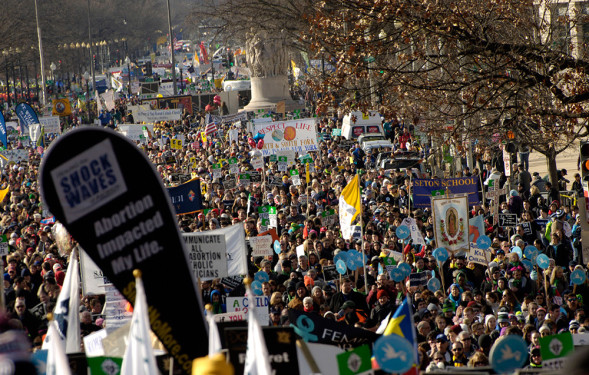 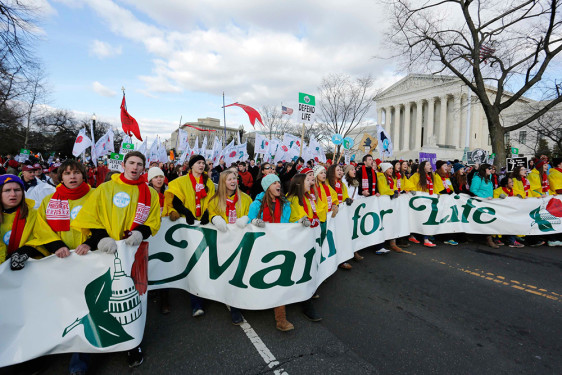 That morning, Auxiliary Bishop Octavio Cisneros represented the Brooklyn Diocese at a pro-life youth Mass at the Verizon Center in downtown Washington. Tens of thousands attended the Mass followed by a noontime rally on the National Mall.

The diocesan contingent arrived in time to march from the Mall up Constitution Avenue to the U.S. Supreme Court building on Capitol Hill.

Carrying a sign that read, “I am the pro-life generation,” 10-year-old Jacqueline Kulaka, a fifth grader at St. Patrick Catholic Academy, Bay Ridge, was proud to participate in her first march.

“It feels great being here because I want to defend life,” said Jacqueline. “It’s important that we all have the gift of life.”

A third-generation March for Life participant, Jacqueline is following in the footsteps of her mother, Annemarie Gillespie-Kulaka, and her grandfather.

“As a child, my father brought me here. My first march was in 1978 when I was 12 years old,” said Gillespie-Kulaka. “So I’m passing on the tradition because it’s important that we teach our children values and the sanctity of human life.”

Gillespie-Kulaka marched with her daughter and son, Matthew, 14, a freshman at Xaverian H.S., Bay Ridge, who attended his first march in third grade.

“It’s amazing to see all of the people come year after year,” said Matthew, who felt this year’s crowd was much bigger than in previous years.

‘So Many Young People’

Fair skies and temperatures in the mid-40s were conducive to drawing large numbers of teenagers, young adults and young families to this year’s march.

“I love to see so many young people,” shared Louis Nunez, youth ministry initiative specialist in the diocesan School of Evangelization and Office of Faith Formation.

“They’re showing they’re involved, they care and our Catholic values are being passed to the next generation.”

That was evident among 10 young women from The Mary Louis Academy (TMLA), who walked with enthusiasm and conviction.

“I believe every life is a blessing and it is one of the greatest gifts God can give to us. We have no right to take that away,” shared TMLA senior Karla Saltos, 18.

“I believe that when people come together, anything can happen. … If this is really a country of free speech and we want to fight for what we believe in, then the government should listen to us … It shouldn’t just be a separation between church and government. It should be about what is morally right to do.”

“Life is something sacred and unfortunately, a lot of people in our society do not understand and see it that way,” shared Father Felix Herrera, parochial vicar at St. Joan of Arc, Jackson Heights, who has been attending the march since high school.

“We’re here as a witness to show the world, our nation and those in authority in our nation that life is sacred. We’re not the ones in control of that; God is.”

“The tide is changing,” Slattery said. “People are tired of liberalism. I think now is the time with a strong Senate and a Republican voice in government.

“I felt it (the march) was futile in the past few years with the Obama Administration but now, I think there’s a good chance. People are having a change of heart.”

And it’s happening across the country as well as in the Brooklyn Diocese.

Kenneth Smith, a junior at Bishop Loughlin M.H.S., is one young man who has had a change of heart on this issue since taking a moral theology class at school.

Before that class, Smith said he didn’t know or care much about abortion. His teacher, Beverley Madar, changed that by teaching students about the dignity of human life, starting at conception.

“There’s a lot of misinformation passed around so education is key,” said Madar.

Participating in the March for Life was not a requirement for class, though when she asked for volunteers, 42 students chose to go “on their own merit.”

Walking with his classmates in Washington, Smith said, “I think abortion is terrible. It’s stopping the life of someone else … and something has got to change.”

Following the rally, marchers paused to pray outside the U.S. Supreme Court, where women were offering testimonies about past abortions.

“Everybody is a sinner. Everybody has made mistakes,” said Bishop Gregory Mansour of the Eparchy of St. Maron of Brooklyn, based in Brooklyn Heights, who walked with about 70 Maronite Catholics from 16 states along the east coast.

Compassion, mercy and love for all of the victims of abortion permeated their prayers.

“We’re not just for life, we’re for Christ and we want to bring Christ’s love and mercy to all who have had abortions or dealt with abortions,” added Marise Frangie, director, Office of Family and Sanctity of Life for the Eparchy of St. Maron of Brooklyn.

“We need to show that every life is worthwhile and … precious from conception to natural death,” Bishop Mansour said. “It’s a persuasion, a loving persuasion.”

Melody Rigaud, 14, from the youth group of St. Gerard Majella, Hollis, was also praying for the women giving testimony and all women who have aborted their children.

“They end up regretting what they do,” Riguad said. “They don’t understand that it’s not just tissue – it’s a baby, it’s their family.”