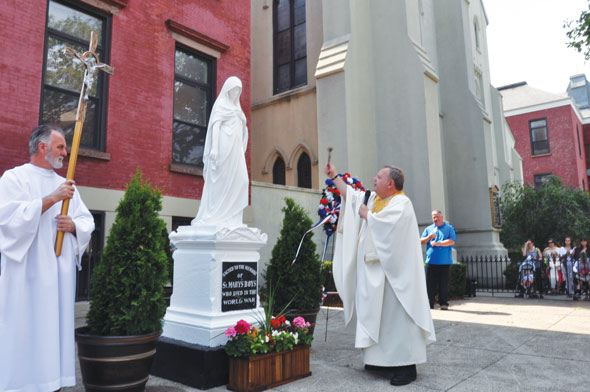 Rich Conte is a guy who doesn’t like to forget. He likes to remember who he is, where he came from and those who have gone before him.

Maybe that’s why he continues to travel every Sunday from his home in Suffolk County to attend Mass at St. Mary Star of the Sea Church, Court St., Carroll Gardens, the neighborhood of his youth.

When Father Chris Cashman, pastor there, announced that he wanted to rebuild the World War I Memorial on the parish grounds that had been destroyed by an auto accident, Rich Conte wanted to be part of it.

The white metal statue had been part of the parish for about 95 years. No one really knows when it was erected except that it was shortly after the “war to end all wars.” The inscription on the accompanying plaque reads: “Sacred to the Memory of St. Mary’s Boys Who Died in the World War.”

Conte, a genealogical and history buff, had wanted to know more about the “boys” and who they were. A retired cop who now had the freedom of owning his own business, he had some time to do the research. If Father Cashman was going to restore the statue, Conte promised to find out who the “boys” were.

Last Sunday, on Memorial Day weekend, a fitting time to remember, the parish was ready to unveil and rededicate its war memorial. In each copy of the bulletin was an insert with the results of Conte’s research – the names and addresses of 25 men from the neighborhood who had died in World War I.

“160,000 U.S. troops were killed in World War I,” explains Father Cashman. “A lot of them came from right here in our neighborhood. They went off and didn’t come back; they gave their lives for their country.”

Conte estimates that about 16,000 of the war dead were from New York State. For the past year, he has been culling diocesan records, the archives of the Brooklyn Eagle and genealogical services and found the names of 25 men from the area around St. Mary’s Church. Some are buried in France in national cemeteries, as well as in Holy Cross and Greenwood Cemeteries here in Brooklyn.

Two of the dead were brothers – James, 27, and Joseph, 20, Seagriff who lived at 524 Court St. One died in action and the other of pneumonia after seeing action in several, major battles.

William Augustine Begley, a 22-year-old, who lived with his mother at 155 Huntington St., died of wounds suffered in the Argonne Forest.

Hannibal Ceccarelli, 31, was a tailor before joining the Army, and had lived at 27 Third St.

Antonio DiLeo, a 22-year-old private in the Army, had an ice business, and lived at 82 Luquer St.

Michael Loughlin, a 23-year-old mess attendant on the USS Galveston, had lived at 85 Second Pl.

On and on they go, the roll call of the heroes of Carroll Gardens were recalled almost 100 years later because of a Brooklyn monument and a parishioner who refuses to forget the past.

In the rear of the church, the names of current parishioners serving in the military were listed with requests for prayers for their safety. Marine Paul Gregory Pietrowski is on his third tour of duty in Iraq. Army specialist Robert Spatarella, Jr., is on duty in Kandaher, Afghanistan.

In his homily, Father Cashman spoke about the importance of symbols and how they help us remember.

“When we pass by that statue, remember and say a little prayer for the men who died for our freedom,” he said.

Following the rededication, parishioners gathered in the parish hall for coffee and cake and to observe the Memorial Day weekend.

Conte helped unveil the statue but skipped the coffee. “I have to bring Communion to one of the homebound,” he said.

One thought on “On Court St., Parish Continues to Remember”