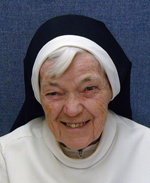 Sister Mary Helaine McGill, O.P., a Sister of St. Dominic, Amityville, L.I., for 73 years, died Jan. 23. She was 94.
Born in Brooklyn as Mary Monica, her father was the architect responsible for designing and directing the building of Good Shepherd Church, Marine Park. He also created the grotto at St. Joseph’s, Monticello, N.Y., along with the ironwork behind the Dominican altar in the early days of Rosary Hall Chapel.
After graduating from All Saints H.S., Williamsburg, she entered the congregation from St. Gregory the Great parish, Crown Heights, in 1939. Later that year, she received the habit and her religious name, Sister Mary Helaine.
One year later, she began her teaching ministry at St. Bartholomew, Elmhurst, 1940-62, and then American Martyrs, Bayside, 1962-85. One of her contributions was a written history of the founding of St. Adalbert parish and convent.
She taught in the Sacred Heart Early Childhood Program, Cambria Heights, 1985-87, and then moved to St. Luke School, Whitestone, where she tutored in the school, 1987-95, and volunteered in the pastoral services program, 1995-2000.
Health issues necessitated a move to Carlin Hall, Amityville, in 2000.
A Mass of Christian Burial was celebrated in St. Albert Chapel, Amityville, on Jan. 29. Interment in the Sisters’ Cemetery followed.
Previous Obituaries Story
Next Obituaries Story