She attended St. Agnes Academic H.S., College Point, and then followed her older sister, Sister Dionyse, O.P., into the Dominican Congregation on Sept. 7, 1947. A year later, they were followed by a younger sister, Sister Timothy Marie, O.P. 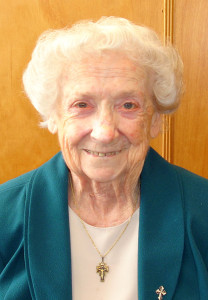 She taught at St. Aloysius School, Ridgewood, 1949-50, and then was part of the pioneer band that opened Sacred Heart School, Cambria Heights, in 1950, where she taught until 1962.

From 1967 to 1975, she served as librarian at Queen of the Rosary Academy, Amityville. Care for her mother necessitated a move to Jamaica and a part-time position at Dominican Commercial H.S. until 1983.