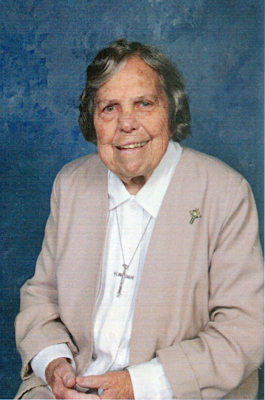 She entered the Grey Nuns in 1946 from St. Joan of Arc parish, Jackson Heights. She earned a bachelor’s degree in English from D’Youville College, Buffalo, and was proficient in American Sign Language.

Retiring from the classroom in 1998, she continued to minister to the deaf and mentally challenged as she had done for many years. She prepared and signed Masses for the deaf and was visitor and extraordinary minister of Holy Communion, bringing the Eucharist to the elderly and homebound.

She volunteered at Mary Manning Walsh Home, Manhattan, and at Rosary House and the Food Pantry at Our Lady of Fatima parish, Jackson Heights. She received an award for her pastoral work with the deaf. She retired to the Grey Nuns Motherhouse last year.

She is survived by two sisters, Sister Marie Cecile, G.N.S.H., and Joan O’Connell of Rockaway, N.Y.

A Mass of Christian Burial was held Oct. 27 in the Sacred Heart Chapel at the Motherhouse in Yardley, Pa. Interment followed in Resurrection Cemetery, Bensalem, Pa.