Bishop Aloysius Jin Luxian of Shanghai, a prominent and controversial figure in the Chinese Catholic Church, died April 27 of pancreatic cancer. He was 96. 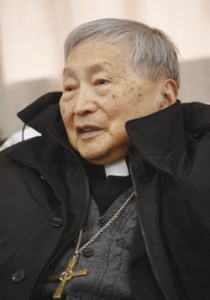 In a 2007 article in The Atlantic monthly, he was described as “arguably the most influential and controversial figure in Chinese Catholicism of the last 50 years.”

In the early 1980s, the bishop, who spent 18 years in a Chinese prison, made the decision to cooperate with the Chinese government, which strove to exercise control over the Church through organs such as “patriotic associations,” including one for Catholics.

Bishop Jin was elected auxiliary of Shanghai in December, 1984, and was ordained the next month, without the approval of the Vatican. He became bishop of Shanghai in 1989 but did not reconcile his status with the Vatican until early in the 21st century, according to information on the diocesan website.