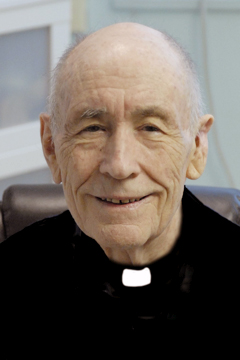 Father Thomas Green, S.J., 83, died on Dec. 26, 2012, at Murray-Weigel Hall, Bronx. He was a Jesuit for 64 years and a priest for 51 years.
Born in Jersey City, N.J., he attended St. Peter’s Prep and entered the Jesuit novitiate of St. Andrew-on-Hudson in Poughkeepsie in 1948. Following first vows, he studied philosophy at Bellarmine College, Plattsburgh, N.Y., 1952-55.
He taught mathematics and physics at Xavier H.S., Manhattan, 1955-58. He was ordained a priest at the Fordham University Chapel on June 17, 1961.
He served as pastor at St. Francis Xavier Church, Manhattan, 1970-77. In 1993, he moved to St. Ignatius Church, Crown Heights, as associate pastor until 1998. Ill health forced him to be assigned in 2012 to the Province infirmary at Murray-Weigel Hall.
A Mass of Christian Burial was celebrated Dec. 31, 2012 at Fordham University Church, followed by burial at the Jesuit Cemetery, Auriesville, N.Y.