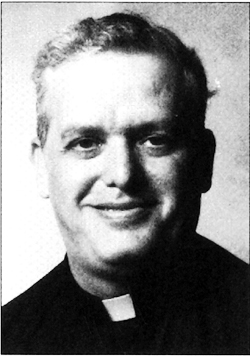 Father Alexander G. Abugel, parochial vicar at Our Lady of Mount Carmel parish, Astoria, died in the rectory, Dec. 26, one day after his 59th birthday. A Mass of Christian Burial was celebrated Dec. 30, 2012 at the church.
Born in Brooklyn, Father Abugel attended St. Gabriel School, E. New York; Cathedral Prep, Brooklyn; Cathedral College, Douglaston; and Catholic University and the Sulpician Seminary, both Washington, D.C.
He was ordained May 17, 1980 by Bishop Francis J. Mugavero at St. James Cathedral, Downtown Brooklyn. He served as an assistant at Holy Name, Park Slope, 1980-82; Blessed Sacrament, Cypress Hills, 1982-83; St. Charles Borromeo, Brooklyn Heights, 1983-84; St. Rose of Lima, Rockaway Beach, 1984-87; Good Shepherd, Marine Park, 1987-88; Our Lady of Guadalupe, Bensonhurst, 1988-93; St. Mary Star of the Sea, Carroll Gardens, 1993-94; St. Joan of Arc, Jackson Heights, 1994-2000; Our Lady of the Angelus, Rego Park, 2000-03; Holy Family, Flushing, 2003-04; and was administrator of St. Mary’s, Maujer St., Williamsburg, 2004-07.
In 2007, he was appointed pastor of St. Patrick’s, Long Island City, where he served until 2011 when he was released from diocesan assignment for one year for health reasons.
In October of last year, he was assigned as an assistant at Our Lady of Mount Carmel.
Bishop Nicholas DiMarzio was the main celebrant of the funeral Mass.
Special concelebrants included Auxiliary Bishops Octavio Cisneros, Raymond F. Chappetto and Paul R. Sanchez; Msgrs. Thomas G. Caserta, Kevin B. Noone and Sean G. Ogle; and Fathers Joseph T. Pham, Michael C. Gribbon, Joseph G. Fonti, Joseph F. Hoffman, Peter Nguyen, Joseph T. Holcomb and Francis J. Hughes.
“In the mid-1990s, he was chosen in a contest run by The Tablet as one of the best preachers in the diocese, by popular vote of many parishioners,” recalled Msgr. Ogle, who preached the homily. “For many years, he gave us much to think about. Above all, I think he loved being a pastor, and he relished many of his days at St. Mary’s and at St. Patrick’s. I found many of his observations here personally helpful to me as a pastor as well.”
Father Abugel is survived by his brother, Nicholas of Staten Island. Burial was in Calvary Cemetery, Woodside.

One thought on “Obituary: Father Abugel Recalled As a Gifted Preacher”