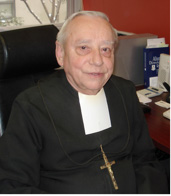 Brother Francis Regis Newbeck, F.M.S., a member of the Marist Brothers of the Schools for 60 years, died Dec. 20, 2012, at Jamaica Hospital. He was 78.
He entered the Marist Brothers Novitiate at Tyngsboro, Mass., in 1953. He professed first vows in 1954. After completing his religious and academic studies at Marist College, Poughkeepsie, N.Y., he served his community as a cook in the Novitiate for one year.
He began his ministry in the Diocese of Brooklyn at Resurrection-Ascension School in Rego Park from 1958 to 1964.
In 1964, he moved to Archbishop Molloy H.S., Briarwood, where he served as a teacher and guidance counselor for 48 years.
A funeral Mass was celebrated Dec. 22, 2012 at Our Lady of Mercy Church, Forest Hills, followed by burial in the Marist Brothers’ Cemetery in Esopus, N.Y.