Msgr. John H. O’Brien, a retired priest of the Diocese of Brooklyn, died on August 30. 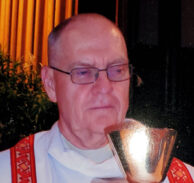 A wake for Msgr. O’Brien was held on Sept. 2 at Presentation of the Blessed Virgin Mary, Jamaica.

A vigil Mass and a funeral Mass for Msgr. O’Brien were also held at  Presentation of the Blessed Virgin Mary. Interment followed at Saint John’s Cemetery, Middle Village, New York.