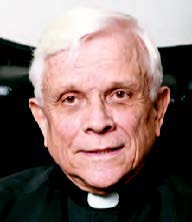 Father Richard Lewkiewicz, affectionately known as “Father Lewk,” who was a dedicated parish priest known for his great devotion to parochial ministry and to Communion calls, died on Nov. 2 at age 79.

A graduate of Cathedral College, Brooklyn, and the Seminary of the Immaculate Conception, Father Lewkiewicz earned a BA in philosophy and an STB in Theology. He was ordained to the priesthood by Bishop Francis J. Mugavero at the Cathedral Basilica of St. James in Downtown Brooklyn on June 1, 1968.

He also served as coordinator of the Rite of Christian Initiation of Adults (RCIA), a process through which non-baptized men and women enter the Catholic Church. In retirement, Father Lewkiewicz lived at the Bishop Mugavero Residence for Senior Priests at the Immaculate Conception Center in Douglaston.

Msgr. Kevin Noone, who served nine years together with Father Lewkiewicz at Our Lady of Angels, remembers that “he had no desire to be a pastor and didn’t want any part of administration. His only ambition was to be a parish priest.”

“Running Bible discussion groups with small groups of 10 to 15 parishioners was most satisfying for him,” he added.

A funeral Mass for Father Lewkiewicz was celebrated on Nov. 10 at the Immaculate Conception Center in Douglaston by Bishop Brennan, with Msgr. Noone as the homilist. Interment followed at Calvary Cemetery, Woodside.

Sister Paulette Claire Lebel, O.P., (Sister Mary Pierre) died on Nov. 5, at age 91. She had served as a Sister of St. Dominic for 63 years. She was raised with her twin brothers, Joseph and Louis, in New Hyde Park, New York where the family worshipped at Holy Spirit Parish.

After graduating from high school, Paulette worked in business for several years.

At the age of 28, on September 6, 1959, Paulette entered the Novitiate at Amityville.

On August 5, 1960 she was clothed in the Dominican habit and received her religious name, Sister Mary Pierre. She pronounced vows on August 6, 1961.

Sister Paulette earned a Bachelor of Science degree in accounting.

Discerning a change in ministry in 1974, she earned a New York State Radiology License.

For the next 30 years she pursued her ministry as a radiologist at Mary Immaculate Hospital in Jamaica, New York, and lived at Mary Immaculate Convent. After retiring in 2004, Sister Paulette volunteered as a driver for sisters in the Queen of the Rosary Motherhouse.

Her ministry in later years was Intercessory Prayer. During these years, she lived in community at Cabrini Residence in Amityville.

As her health declined, Sister Paulette resided in Carlin Hall at the Rosary Motherhouse.

Sister Paulette’s funeral was held Nov. 8 in St. Albert Chapel. A Mass of Christian Burial was followed by interment in the sisters’ cemetery.

He had three brothers and five sisters. As a boy, he was a parishioner of Mt. Carmel, in Williamsburg, and attended PS 17. He graduated from Cathedral Preparatory High School, Brooklyn, in June 1944.

He was ordained a priest at Maryknoll Seminary, New York, on June 13, 1953. After ordination, in preparation for his mission career in Korea, Father Zunno studied the Korean language and culture for one year at the Far Eastern Language Institute, Yale University, New Haven, Connecticut.

After celebrating his 50th Jubilee in 2003, Father Zunno joined the retirement community (now senior missioner community) and returned to the U.S. to live at Maryknoll, New York. Upon his return, Father Zunno helped out at Our Lady of Mt. Carmel Parish in Brooklyn.

A Mass of Christian Burial was held Nov. 4, in the Holy Spirit Chapel and the Queen of Apostles Chapel at the Maryknoll Society Center.

Father David Pfeiffer was the celebrant and Father Joseph Veneroso was homilist. Burial followed in the Maryknoll Society Cemetery, with Father Lance Nadeau presiding at the graveside prayers.