As was his post-game custom on the road, Coach Jim Phelan called his home in Emmitsburg to check in with his wife, Dottie, who was drowned out by a raucous celebration in the background, courtesy of some of their five adult children. His own spirit sounded muted, however, and Dottie asked him what was wrong. 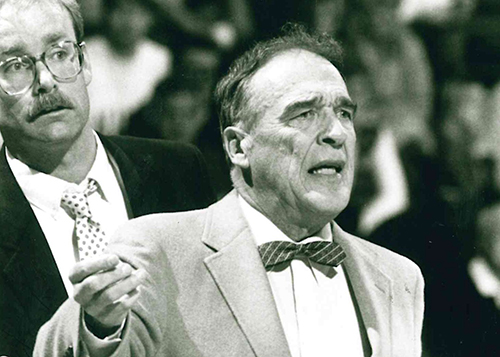 “I think I just cost a coach a job,” Phelan answered.

Bobby Cremins was just fine in Atlanta, as the Yellow Jackets rebounded to reach the Sweet 16 in the NCAA tournament that season, but the exchange typified Phelan’s concern for his fellow man, regard that was reciprocated in Emmitsburg and across college basketball June 16, after he died in his sleep at the home he shared with his wife of 67 years. Phelan was 92.

An afternoon memorial service was scheduled for June 24 on the Jim Phelan Court at Mount St. Mary’s Knott Arena.

Few laymen matched his contributions to The Mount, as it’s known, which gave Phelan a one-year contract to coach in 1954. It turned into 49 uninterrupted seasons on the same campus, the third-longest in the history of the sport. His 830 career victories made him the game’s winningest active coach when he retired in 2003, at age 73. It still ranks him 13th of all time.

His 1962 team won a national championship in the College Division, one of five Final Fours the Mountaineers reached in what is now Division II. Phelan was inducted into a dozen Halls of Fame, but his influence on the Mount went beyond basketball and his signature bow tie.

As athletic director from 1967 to 1989, Phelan added programs for women’s teams after the college went coed; began its move from Division II to Division I; and oversaw the construction of the Knott Arena complex.

As a coach, Phelan recruited the first Black student who resided on campus, in 1965. Fred Carter went on to play for the Baltimore Bullets in the NBA. Jamion Christian and Cliff Warren not only played for Phelan but returned to Emmitsburg to coach.

Phelan was inducted into the National College Basketball Hall of Fame in 2008.

Vincent A Bocchino, a member of the Cathedral Club of Brooklyn, passed away peacefully on June 16, surrounded by his loving family.

His fellow members of the Cathedral Club of Brooklyn, the primary Catholic lay organization in the Diocese of Brooklyn, said Vincent “was a loving friend to many, will be missed by all who knew him and will be remembered as a Bay Ridge legend.”