Sister Mary Nivard Stabile, OP, died on July 14 at age 98, having served as a Sister of St. Dominic of Amityville for over 78 years. 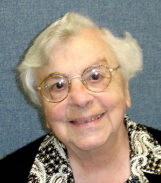 Catherine, as she was baptized, was the only child of Francis and Constance Stabile. She thrived at Holy Trinity Parish and School and found her soul’s goal through her connection with the Dominican sisters there. After a year working at the United States War Department Signal Corps, she entered the Novitiate in Amityville in September 1943. Catherine received the habit along with the other members of the “Daisy” set and her religious name, Sister Mary Nivard, on August 8, 1944. Sister Mary began her teaching career at St. Pancras Elementary School in Glendale, Queens. She soon found her true calling teaching high school students at Bishop McDonnell and St. Michael High Schools in Brooklyn. She prepared many young women for positions in the business world. During this time, she herself was seriously and deeply involved in her own studies enough to achieve a Bachelor of Business Administration and a Master of Science in Business Education.

Meanwhile, the Amityville Congregational Leadership was planning on following the wide movement in Dominican communities in the 1950s to prepare the current generation to follow the educational call to be preachers by establishing Molloy College in Rockville Centre. Soon Sister Mary became an economics professor there. She also assisted in establishing the necessary business offices for the new college. She served in and developed the positions of Registrar, Director of Admissions, and Dean of Students.

True always to the changing world in education as well as theology, Sister earned a Master’s in Theology and began ministering in a number of parishes and colleges on Long Island. While serving as Director of Religious Education in St. Patrick’s Parish in Smithtown, she also was Campus Minister at Farmingdale State College. In that latter placement, it was noted in local newspapers that Sister Mary Nivard was the first woman to serve in the position at the college. Sister also ministered at St. John’s University in Jamaica, Queens, as an adjunct professor for many years.

The wake and funeral were scheduled to take place in St. Albert Chapel on July 19, including a prayer service and Mass of Christian burial. Interment was in the sisters’ cemetery.

Sister Elise Gimblet, CSJ, a member of the Sisters of St. Joseph for 74 years, died on July 1 at Stella Maris Convent at the age of 91. 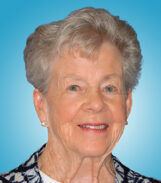 Her faithfulness to the Eucharist and the Rosary enriched all she met in the various assignments she embraced. These included teaching in the Diocese of Brooklyn’s elementary schools at St. Athanasius, Our Lady of Perpetual Help, St. Joseph’s, St. Martin of Tours, and St. Mel’s; teaching history at Academia Santa Maria (Ponce, Puerto Rico) and Academia San Ignacio (Rio Piedras, Puerto Rico); teaching social studies at St. Martha’s (Uniondale, New York) and history at Stella Maris High School and serving as principal of St. Thomas Aquinas, Brooklyn.

In 1975, Elise saw the need to support the sick and responded fully. She earned her LPN and then her RN while serving at Caledonian Hospital, St. John’s Queens Hospital, and Columbia Presbyterian Hospital. In the years that followed, St. Joseph’s High School and The Mary Louis Academy embraced her as their school nurse, and Girls’ Hope in Brentwood was fortunate to have her as their resident counselor. Elise also taught in the Learning Connection, Brentwood, and was part of the Pastoral Care group at St. Joseph Convent, Brentwood.

Father Sean Taylor, OFM, celebrated the Mass of Christian Burial for Sister Elise on July 6 in Sacred Heart Chapel, Brentwood. Her cremated remains will be buried at a later date in Calvary Cemetery, Brentwood.

He received his BA at Cathedral College, Douglaston, an MA at Immaculate Conception Seminary, Huntington, and a Master’s Degree in Liturgical Studies from the University of Notre Dame.

He was named parochial vicar at St. Dominic parish in 1978, Parochial Vicar of St. Mary Mother of Jesus Parish in 1989, Pastor of Saints Simon and Jude Parish in 2005, and pastor of St. Andrew the Apostle in 2014. During that time, Father Stankus worked on the Liturgical Commission of the Diocese.

A funeral Mass for Father Stankus, who was affectionately known as “Father Greg” by many of his parishioners, was held at St. Andrew the Apostle on July 18. The main celebrant was Bishop Robert J. Brennan; the homilist was Msgr. Ronald Marino. Interment was at St. John Cemetery, Middle Village, New York.

“[A good priest] does the noblest work on earth: keeping Christ alive in the lives of his people,” Msgr. Marino said in his homily at Father Stankus’s funeral Mass. “We thank Father Greg for being that kind of priest.”