Retired Priest Remembered for ‘His Goodness and His Generosity’

Father Canon Leonard F. Badia, a retired priest of the Diocese of Brooklyn, was born on August 23, 1934 and entered

into eternal life on June 14, 2022. Father Badia was ordained a priest by Archbishop Bryan J. McEntegart on May 28, 1960 at Saint James Cathedral, Brooklyn, following studies at Cathedral College of the Immaculate Conception, Brooklyn, and the Seminary of the Immaculate Conception, Huntington. Father Badia held a doctorate in Religious Education from New York University.

Father Badia was active in the ecumenical and inter-religious dialogue of the Church and was the publisher and editor of the Catholic-Jewish magazine Dialogue Today. Because of his work in Catholic-Jewish dialogue, Father Badia was named a Canon of the Roman Catholic Church at the Cathedral of the Annunciation in Lowicz, Poland. He was also a Knight Commander of the Holy Sepulchre.

A former professor at Saint John’s University, Father Badia was the author of several books, including Dead Sea People’s Sacred Meal and Jesus’ Last Supper (1979); Morality: How to Live it Today (1979); Basic Catholic Beliefs for Today: The Creed Explained (1984); Insights: The Catholic-Jewish Faith (2009); the novel, along with Michael F. Capobianco, Kidnapping the Pope (2015); Jesus: His Life and Teachings (2009) as well as the website InsideCatholicism.com

Father Badia was pastor of the parish of St. Francis of Assisi, Astoria, and had served as the parochial vicar of St. Margaret, Middle Village; St. Andrew Avellino, Flushing; and Saint Kevin, Flushing.

“He was a faithful friend, and a devout priest, as well as a good teacher of theology,” said Father Joseph Holcomb, who met Father Badia during their days together at St. Andrew Avellino and knew him for more than 40 years. “I’ll miss his goodness and his generosity.”

Father Badia had been serving for several years after his retirement in the Diocese of Palm Beach, assisting in parochial work. 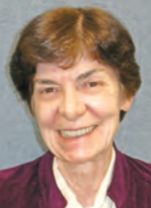 Born Anne Marie Devoy on August 3, 1939, her early days with her family were spent in Brooklyn, and later in Freeport, New York.

Anne Marie attended Bishop McDonnell Memorial High School in Brooklyn, where she excelled in academics, music and athletics. She played piano, organ and bass violin and was in the Bishop’s Orchestra and the Community Orchestra.

On September 7, 1957, Anne entered the novitiate at Amityville and received the habit and her religious name, Sister Loretta Marie, on August 5, 1958. A year later, on August 7, 1959, she professed first vows, and final vows were professed on August 7, 1962.

Loretta’s ministry was in education. She received a Bachelor of Arts in French at St. Francis College, Brooklyn, and a Master of Science in Education at St. John’s University, Jamaica, Queens.

At Fordham University in the Bronx, she earned a Master of Arts and PhD in Theology/History of Christianity. Her doctoral dissertation was titled “A Study of the Eucharistic Texts of Teilhard de Chardin.”

From 1959 to 1970, Loretta ministered as an elementary school teacher at Sacred Heart, Cambria Heights; St. Thomas the Apostle, Woodhaven; Corpus Christi, Woodside; and St. Elizabeth, Ozone Park. In 1970 she was appointed principal at St. Luke, Whitestone. In 1973 she was elected to leadership in the Congregation as Regional Director. After her term ended, she became principal of St. Ignatius Loyola, Hicksville.

The wake and funeral for Sister Loretta were held in St. Albert Chapel in Amityville on June 22. A prayer service was held, followed by the Mass of Christian burial. Interment followed in the sisters’ cemetery.