Msgr. was ‘advocate for right to life’

Msgr. Raymond J. Kelly, a retired priest of the Diocese of Brooklyn, died on April 5. 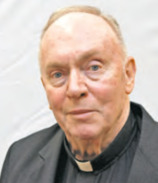 Msgr. Kelly was born in Brooklyn on May 28, 1936. He was ordained a priest on December 20, 1961, after studies at Cathedral College of the Immaculate Conception, Brooklyn, and the Pontifical North American College in Rome.

In 1983, Msgr. Kelly was assigned to the pastorate of Saint Malachy, East New York, where he served for many long and fruitful years.

Msgr. Kelly was granted the title of Reverend Monsignor (Chaplain of His Holiness) by Pope Saint John Paul II in 2003.

Upon his retirement, he moved to the Bishop Mugavero Residence for Senior Priests at the Immaculate Conception Center, Douglaston.

Msgr. Kelly’s eulogy read, in part, “With a lifelong commitment to the dignity of human life, he was passionate [about] pro-life from the start…counseling countless men and women to make the right choice.”

A funeral Mass was held at Immaculate Conception Center on April 13.

Sister Barbara Ann Gregorek, OP died on April 9 in her 77th year of life. She had served the people of God as an Amityville Dominican for 56 years.

It was obvious from the very beginning of her ministry as a Catholic school educator that Sister Barbara fully believed and taught that God was the prime center of the entire school curriculum.

Her first teaching assignment was at Most Holy Trinity School in Brooklyn, where she developed her many gifts and skills of teaching the younger children.

She honed her teaching gifts at All Saints School, Brooklyn, for over 20 years and then moved to Our Lady of Refuge School, also in Brooklyn.

It was at St. Mel’s School in Flushing, Queens, however, that Sister Barbara found her deepest love for education and true understanding of developing faith in God for all her students.

For most of those years, she taught eighth grade.  Sister  Barbara gave much attention to bringing the belief of God’s presence into every aspect of life to the classroom.

Sister Barbara retired from St. Mel’s School in 2020. When she celebrated her 50th Jubilee, her pastor surprised her with a trip to the Holy Land where she found the depth of the Spirit, saying, “One reads Scripture differently after seeing these places.”

Barbara is grieved by her cousins and especially her two nephews, Ted (Henry) and Ed, and their families. Her community members, Sisters Colleen Colbert and Mary Spencer, will miss her avid devotion to the Mets and mostly her loving presence.

The wake and funeral for Sister Barbara was held in St. Albert Chapel in Amityville on Wednesday, April 13, 2022.

A prayer service was held, followed by the Mass of Christian Burial.  Interment followed in the sisters’ cemetery.