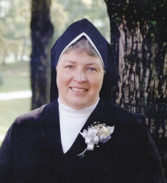 Sister Ann Marie McNicholl, a native of Jackson Heights, died June 29 at Montefiore Medical Center in the Bronx. She was 80.

She entered the Carmelites in 1957 and served locally in Madonna Residence, a former nursing home in Park Slope. She also served in hospitals and nursing homes elsewhere in New York state, as well as in Massachusetts and Ohio.

A memorial service was held on Aug. 1 in the chapel of Providence Rest Sisters of John the Baptist, a retirement home in the Bronx.